Link to an item in the news you’ve been thinking about lately, and write the op-ed you’d like to see published on the topic. 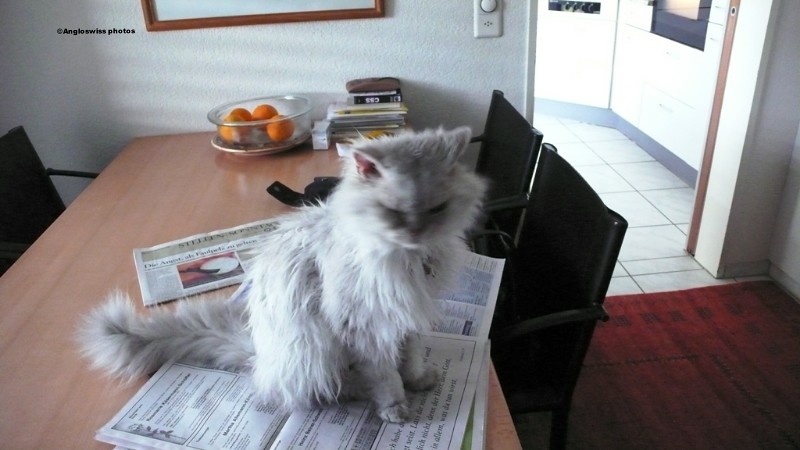 “Anything good in the newspaper Fluffy?”

“It is the human newspaper, so only has stuff about politics and film stars, although I read they will be having elections soon.”

“Another waste of time to read Fluffy. They never elect a feline as Prime Minister. They are jealous of our gifts of territorial protection. I will have a look at the Feline Times on my pawpad, there might be something interesting there. Yes, look, well I never, Garfield has been awarded the Golden Feline for his role in the film, Go West young kitten.”

“Oh I read the book by Catnip Tiddleywinks. I had to take a dose of catnip afterwards to settle my nerves. It was so emotional.”

“Fluffy, since when do we felines have emotions?”

“Tabby, of course we have emotions, it is written in the book of Bastet, chapter 1066, verse 400a “Felines have a 10th life called emotion. It is to be kept from human eyes as it would be seen as a sign of feline weakness. It may exist after being involved in a book or film. This 10th life is to be kept from non-feline eyes.” You see Tabby.”

“Yes, but it was written as an appendix to verse 400, which says “stay cool and when excited take a dose of catnip”.

“Tabby, Bastet is so wise. She has an answer for everything.”

“Ok, anything else in the Feline Times?”

“Yes, there is. Apparently a flock of swallows will be arriving from other countries, exhausted after such a long flight. They will be ideal as prey for felines.”

“There is a map showing the route. It doesn’t seem to cross our territory.”

“Tonight is ideal weather for mice. They will be searching for larger homes to accommodate their growing families. It is advisable to watch and wait.”

“Fine, then I will take a moolight walk this evening. Sounds very profitable. Perhaps I might write an article about my success for tomorrow’s edition. I might even take a selfie of me with a mouse hanging from my paws.”

Daily Feline Prompt: It must be true, Bastet said it was