This is a reblog, but on the felines own site. I wrote this the first time this prompt was uploaded and my chief cat, Nera, was still amongst us. In the meanwhile she is now serving as chief feline somewhere in the Kingdom of Bast, some sort of apprentice god. Now and again she appears on my Cat Chronicles, although somewhat transparent. 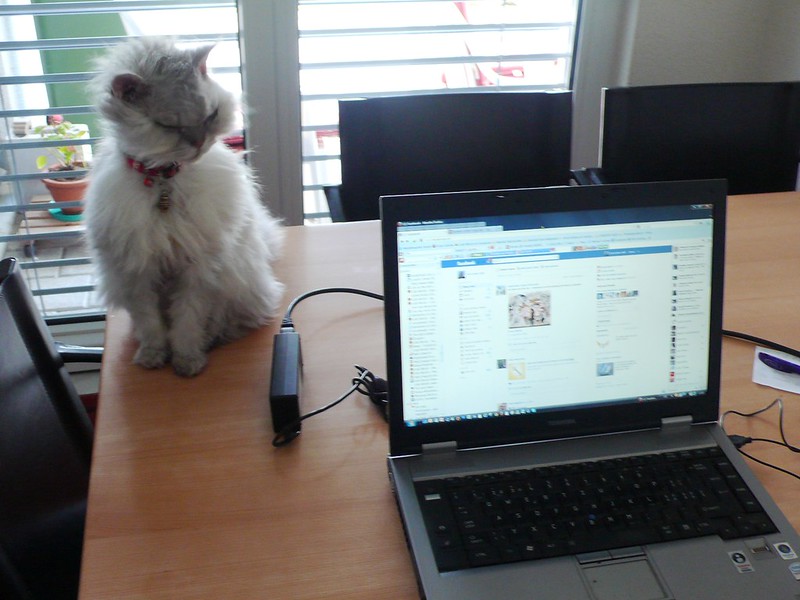 “No, Fluffy, forget it. Come away from my computer, no way are you going to switch blogs with me.”

“But, Mrs. Human, Nera and Tabby, my two feline groupies, said they would help me. It would be a combined effort: life from the point of view of a feline.”

Some time ago, through paw persuasion, I set up a blog for my cats, “The Cat Chronicles”, and as usual, they now want to take over; a sort of feline “Switcheroo”

“Felines, I am sure that the WordPress public are interested in knowing where the best mice can be found, or the tastiest water is. They also do not want to know how to have a full body scratch, lick and wash.

Actually I was thinking about having a swop with Wiley, the most intelligent dog I know. He lives in Wisconsin and is a real philosopher. There are many humans that could take a page out of his blog.”

Nera the chief cat looked at me with sort of yellow daggers pouring from her eyes.

“Don’t worry Nera” I said “I do not think it will happen. Wiley has no time for felines. I think it might be because the felines think they on the same level as the gods.”

Tabby was annoyed. “That is not true Mrs. Human, it is a fact. We were Gods; worshipped by all. If it were not for such a superior race as the felines, your world would long have been taken over by mice and rats. You have you read that book where rats take over the world?”

“Yes, Tabby, but that was fiction and it had a happy ending. The rats died. Now we have a world taken over by humans and …….”

“You think” said Nera. “We lead you to believe such rubbish to make sure we get our daily rations of tuna and perhaps salmon.”

“Yes Mrs. Human” said Fluffy. “It is all a matter of psychological training. Humans love us, you must admit. You worship us as in the olden days in Egypt in the corn chambers.”

“OK felines, so you are world power No. 1. What has this all got to do with swopping a blog. I am not swopping my blog with three puffed up felines who think they rule the world.”

“Excuse me Mrs. Human” Nera spoke. “I have often told you I am not puffed up, or even overweight, it is fluff. My wonderful silky long fur and our gift of literature is far beyond that of a simple human. Have you ever read the Garfield cartoons.”

“Garfield is the most intelligent, gifted feline that I have ever read. His blogs are perfect.”

I decided to end this conversation. I did not want to disappoint Nera by telling her that her idol was a cartoon figure and did not exist.

So the result is that I am not going to swop a blog with anyone. We all have our own style of writing and our own ideas. Of course there are blogs that I admire and like, but we all have our favourites, and not all have the same taste.