Who doesn’t love a list? So paw one! Top five slices of pizza in your town, ten reasons disco will never die, the three secrets to happiness — go silly or go deep, just go list-y. 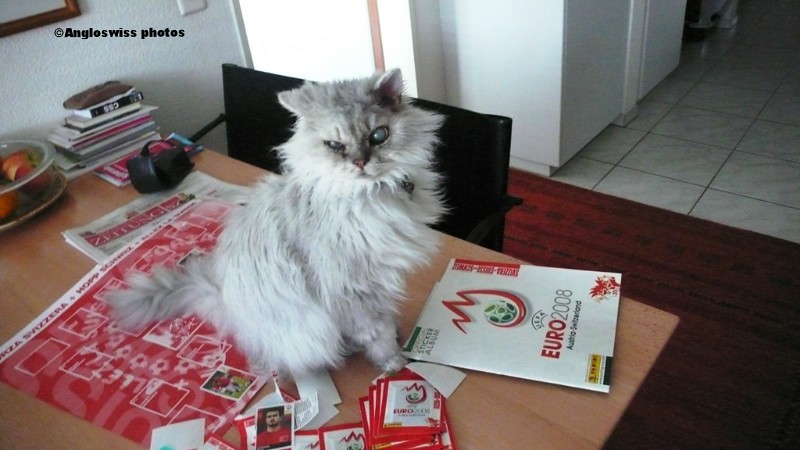 “I remember when I tried to do a list for the Football cards Mrs. Human was collecting, but it didn’t work.”

“Of course it didn’t Fluffy, because we felines have no interest in Football. Have you ever seen a feline playing football Fluffy?”

“But Tabby, you sometimes kick a fluffy ball around when Mrs. Human throws it.”

“That is just to humour the humans and make them feel successful. Do you really think that a sensible intelligent feline would kick a ball around? Of course, we might make an exception if it is stuffed with catnip.”

“On my list. No. 2 is definitely tuna fish and No. 3 fresh bird, No. 4 being fresh mouse. I suppose I could put freshly caught butterfly at No. 5.”

“Fluffy, we felines do not make lists. We do not need lists. We pounce when the paw is hot and do not dither making lists.”

“I was just trying to organise things.”

“Fluffy we are organised and do not have to organise. In Chapter 101, verse 24 in the Book of Bastet it stands “Felines do not organise, they have humans that will do the organising.Train your human daily. Humans are fallible, they are not so perfect as felines and make mistakes. It is the duty of the feline to point the human in the right direction. A slight scratch or hiss are recommended.”

“Ok Tabby, then no lists. It is a human thing and thus below our dignity.”