What’s the licking job you most dislike doing? Why do you think that is — is it the task itself, or something more? 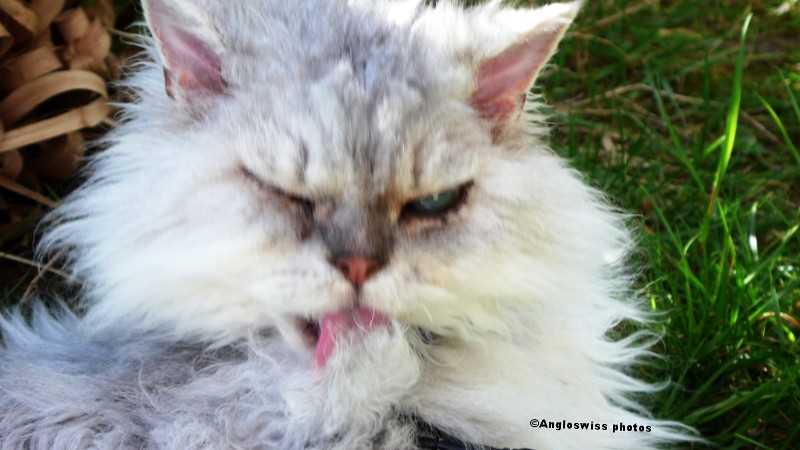 “Sort of ask a silly question Tabby. It is obvious that everything has to be licked, especially the paws. We need them for the face and behind the ears.”

“Quite right Fluffy. My mum always said a clean feline is a perfect feline. Never leave a smell of fish or other delightful food on your face. It might be that other felines begin to sniff the air and become jealous.”

“My mum would lick us a lot when we were kittens. She said if we smelt the other felines would start to talk and say that she was not a good mum.”

“Funny thing with humans. They have things like baths and sinks that they fill with water and they use smelly slimy stuff called soap.”

“That is to compensate Fluffy, because they do not have such well advanced tongues as we do. I often wondered why Mrs. Human washes my food dish in the sink or even in that noisy machines she has. It takes ages. Just a quick lick would do the job just as well.”

“You know Tabby, I think something happened in the development of the human system. At the beginning they were like us and then they changed.”

“That’s is even in the book of Bastet Fluffly, chapter 408, verse 22. “Regard humans as being primitive creatures. Whilst we felines were improving all the time with our intelligence, humans made a stop somewhere. They are to be pitied. They are not as agile as we felines and their ears are restricted to just a few muscles. They are a primitive species, but they have their use. Pawless limbs with fingers can be useful, especially for emptying our recycling process and opening tins. We should pity the lower creatures of the world but ensure that their lesser gifts are applied for feline needs.”

Daily Feline Prompt: Who needs to clean anything when you have a nice rough tongue