Tell us something most people probably don’t know about felines. 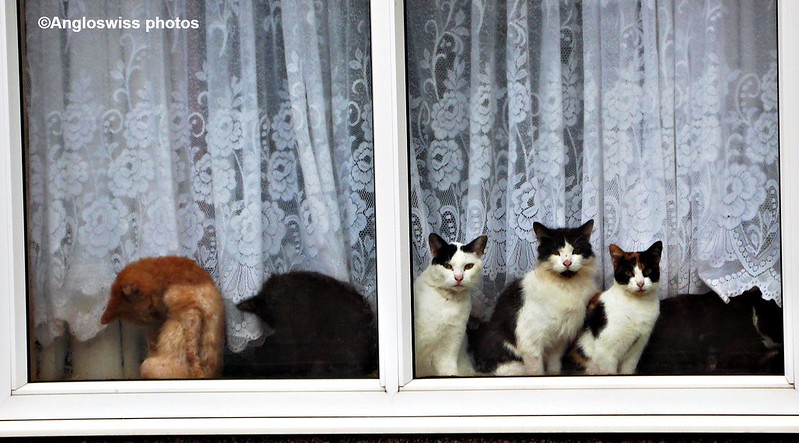 “It is, I got it from a forum site that Mrs. Human belongs to and it was especially posted for us from a guy calle Lee that lives in the States. He is also owned by felines. One of his felines is the boss. read what he tells us.”

Numbnuts the neighbour has acquired another three cats that he keeps outside most of time and generally ignores. (Why the hell do idiots like that even want to have a pet seeing as they just neglect and ignore them?)

Anyway, one of the big dogs (Alsatian sized) from the end of the road was on the loose last night. Known to be a cat killer. Wandering around the neighbourhood.

Those three cats hang out on the porch of their owner’s house.

Along comes the dog. He’s going to go after the cats on the porch.

Around the side of the house comes our tomcat who has befriended these hapless cats.

Tomcat places himself between the dog and his friends, does the inflating cat trick and just stands there, silent, staring at the dog.

Woof, growl, feint – doesn’t work. Cat won’t be intimidated. Cat stands there like Chuck Norris in a shoot out – just radiating “Come get some, Motherf….”

Dog doesn’t know what this cat is up to. Cat hasn’t read the “Cats are afraid of dogs” rulebook. Cat is also very, very confident and very, very calm. Cat may have tactical nuke hidden on his person or something.

Dog shuts up, turns around and goes back to his house, looking nervously over his shoulder, Tomcat is following close behind to make sure he (the dog) gets the hell out of Dodge.

“Great Tabby, you do it first and I will follow.”

“I will have to think about it.”