When life gives you lemons… make something else. Tell us about a time you used an object or resolved a tricky situation in an unorthodox way. 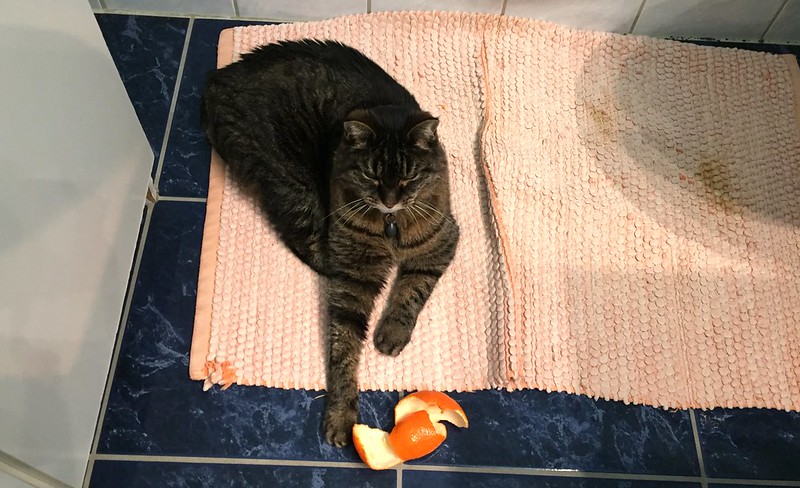 “I do not do lemons Mrs. Human. No self-respecting feline would go near one. They are evil, and have a certain suspicious something. I am convinced they are destructive. Just look at them. Big and yellow and they stink. I know a feline, Cuddles, he was attacked by a lemon. His human had a dish of lemons in the kitchen. He touched the lemon with his paw and the lemon reatcted. It released its poisonous juices all over his paw. He decided to remove with an accurate lick and then the juice got onto his paw. Afterwards he absorbed the juice on his tongue and then it happened.”

There was no cure, nothing. He struggled on all four legs and found his water bowl. He put his head in the water to wash away as much as possible, but there was not enough. He decided there was only one cure and so he visited the human recycling bowl, the one that constantly renewed water after pawing on the lever. He jumped in, spraying the bathroom with the water at the same time. Cuddle’s human was quite annoyed and shouted at him, but Cuddles persevered. When he eventually emerged from the recycling bowl he discovered the dreaded lemon was gone, washed away.”

“Did he recover Tabby.?

“Yes, but be warned Mrs. Human, never let lemons enter spaces where felines rule. They will contaminate your feline. We even dream of the dreaded lemons chasing us peeled and ready to devour us.

“Are you perhaps allergic to lemons Tabby?”

“It is not an allergy but a scourge, a curse on the feline existence.”

“Then perhaps you would prefer an orange, a banana, or an apple. Tabby, where are you going?”

“To my food bowl in the kitchen. I believe I have some nice aromatic dry vitamin pellets left. They are healthy and smell of Chicken, or do you have the strange idea of serving them with a bowl of lemon juice.”

“Now that’s an idea Tabby. Humans often dip their fingers into lemon water after eating oily food. It is a very good cleaning method. Tabby, Tabby. She cannot hear me, she has buried her head into the vitamin pellets, and I always thought she preferred tuna fish.”

Daily Feline Prompt: Felines do not do lemons

7 thoughts on “Daily Feline Prompt: Felines do not do lemons.”