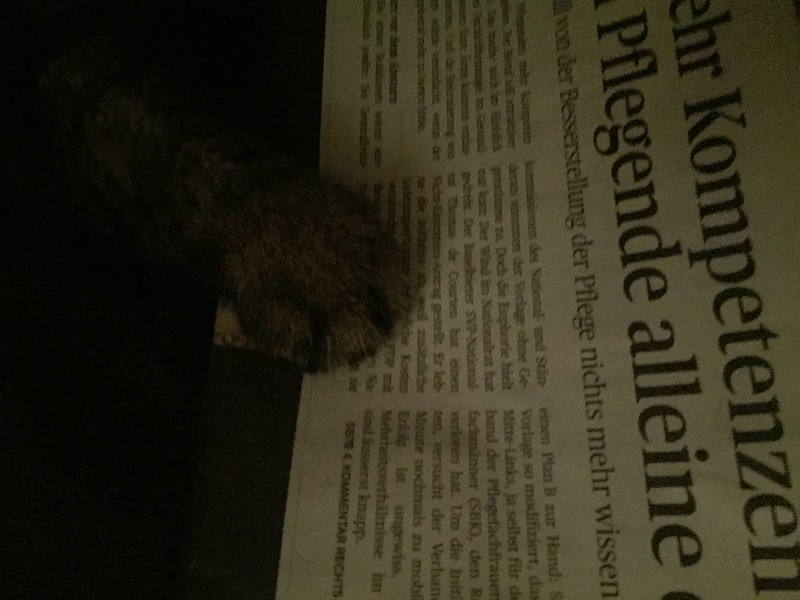 “Did you say something Mrs. Human?”

“Yes I am looking for my newspaper.”

“No problem, you can have it when I have finished reading it.”

“First of all it is my newspaper, until I am finished with it. Afterwards you may read it. Secondly the cupboard is the only place a feline can have some peace and quiet in this place and avoid human disturbances. I would also remind you that thanks to my gift of nocturnal vision, I have absolutly no problem in reading the newspaper in the cupboard. Any other problems?”

“Not wanting to disturb your lecture Tabby, that is of course furthest from my intentions, but I would like to read the newspaper. Could you perhaps remove your paw so that I could take it.”

“My paw is there for a reason Mrs. Human. It is to stop any unwanted creatures from stealing my newspaper which is the main object of my attention at the present moment. It also expresses a territorial claim on the newspaper.”

“What is so intersting in the newspaper Tabby, it is for humans not for felines.”

“You might think so, but did you notice that tins of tuna fish are being offered half price and only this week. Perhps you could add it to your shopping list. It also says something about katzenjammer, although I do not quite understand that one. Are we fellines being accused of something, will there be a political upheaval in the feline parliment?”

“No Tabby, it is a phrase used about complaints after the fusion of two Swiss companies: something like the morning after the night when you have sniffed too much catnip.”

“You humans do have problems, better keeping your fingers from the stuff, humans are not so used to it like we felines. So I am now finished, you can have the newspaper.”

“But Tabby what are those tears and scratch marks?”

“It helps to concentrate on the text, a human newspaper is not written in meow. I had to do a simultaneous translation, and you know that Dada was based on being simultaneous. I read it in that book you are reading.”

“No Tabby, my Kindle stays here, I did not reload it this morning for you to read in the cupboard.”

“No problem, Mrs. Human, I don’t have to employ my night vision with the Kindle, it has a back light.”