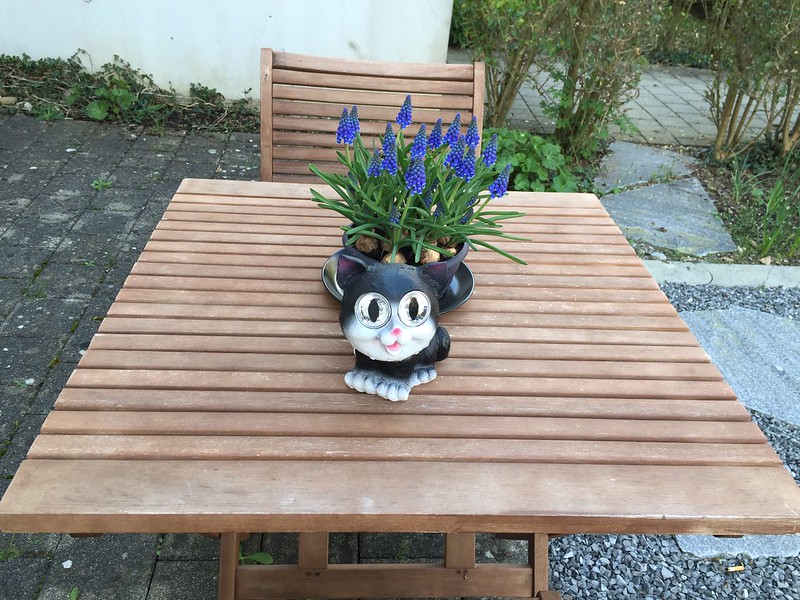 “Mrs. Human, there is a monster on the table outside in the garden with big shiny eyes. I thought it might be a feline, but it doesn’t smell like a feline, it has no smell. I think it is a fake and pretending to be a feline.”

“I found it in the supermarket Tabby. It is a little statue of a feline and has eyes that reflect. It is all steered by the sun.”

“My eyes reflect as well, but I steer them myself. No Mrs. Human, that monster is possessed, probably by a felinogeist. Remove him, otherwise I might knock him off the table.”

“One of those things that absorb fake waves of felines. Not all the felines found in the pyramids in the old country volunteered. Some were forced and their ghosts still haunt the statues. Mark my words Mrs. Human. Our famous writer Stephen Paws Kingkat said “Monsters are real, and felinogeists are real too. They live in supermarkets and sometimes, they win”. In that case I would remove the object, look his eyes are shining again. Kill it, on the other hand wait, can you eat it?”

“No Tabby, I did not buy him to be killed or eaten. He is there to light the way at night if someone walks past the garden.”

“But I don’t need lights, I see perfectly in the dark.”

“But humans do not.”