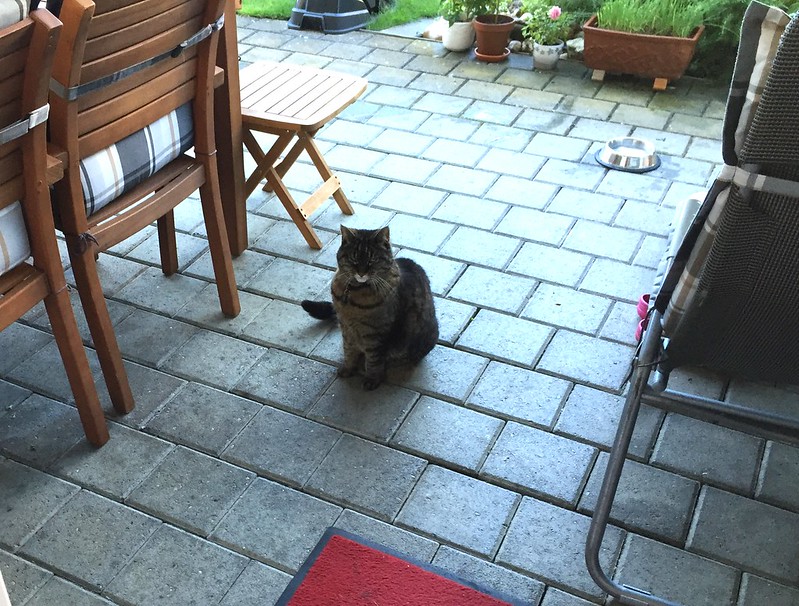 “I was away for a week. How are you keeping?”

“Don’t ask, what do you care? You left me on my own and did not tell me you were going. I could have had an accident, been left homeless and what would be worst, no-one to feed me.”

“But Mr. Human looked after you, gave you tummy tickles and filled your bowl with food. He told me he even fed you with tuna fish, twice.”

“That is not the point Mrs. Human, my routine was disturbed. There was no co-ordination, everything was in the wrong place at the wrong time. I had to sleep twice as much as usual to recuperate from the stress. I was feeling so frail, wasting away with mental deficiency.”

“But you look very healthy and I even think you have put on some weight.”

“That is not fat Mrs. Human, just fluff. I had to fluff myself up to compensate for the neglect. As Victor Hugo Lepaws said “Be as a feline perched on a frail branch that she feels bending beneath her, still she meows away all the same, knowing she has paws” I was being brave for Mr. Human, but he did not empty my recycling tray the same way as you do it and there were no chopped chives or cat mint garnishing my food bowl.”

“Chopped chives? I though you did not like them.”

“That is not the point, we felines also eat with the eye. The next time you leave, tell me before you go to enable me to psychologically prepare myself for the change, to get used to what will be happening. It was a complete shock to my system, I can hardley lift my paw, so exhausted I am with the human neglect.”

“Tabby don’t you think your are exaggerating a little?”

“Exaggerate does not exist in meow, we are realists and say it as it is. And now I will take a sleep for a few hours, do not disturb me with the noise when refreshing my re-cycling tray or preparing my food.”

“Of course Tabby, would you like chopped chives or minced catmint as a garnish.”

“No, just plain and simple with a twist of a tarrogon leaf, and smooth, not shaken.”

Now where did I here that one?