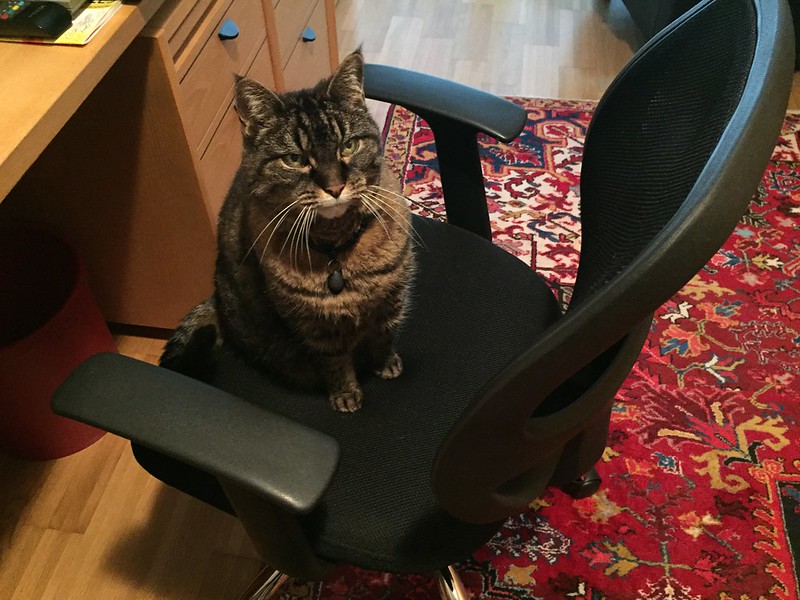 “Tabby I was looking for you everywhere.”

“And now you have found me, so no problem. Actually I am looking for a book.”

“A book, I did not know your read books.”

“Of course I do, I have a simulateneous translater in my claw into meow. I have just been reading “The Origin of the Species” and find it full of mistakes. This human seems to have the impression that it all revolves around the humans and their origins, being apes. I must agree, I see many similarities to the apes. But according to my feline profound knowledge, I must ask where did the apes originate. The Origin of the feline species, which were the first of course, is not mentioned anywhere.”

“Perhaps Darwin did not find them so important to be mentioned as the source of his ideas.”

“Which goes to prove that he did not really know what he was talking about. We felines were the first, arriving from the planet Koshka when the earth was still cooling down. It was just another planet to conquer.”

“You mean you conqered others?”

“Of course, but not in this solar system. We tried Venus, but it was not our sort of thing: raining all the time. Mars was a little better, but it was only the ginger felines that felt at home there.”

“You mean there are still some felines there?”

“Of course, you just cannot see them very well through the telescope as they are camoflaged by the red earth.”

“Of course not, what the human does not see, it does not believe, typical apish traits.”

“So you are telling me that the first earth inhabitants were the felines.”

“Do you see sculptures of gods in human form in Egypt, of course not. They are all in the form of felines. We were the first.”

“But some are in the form of dogs.”

“We all make mistakes with the first experiments, and dogs also have their values. They obey an do not ask questions like some other animals.”

“What about the felines in other solar systems.”

“No problem, they are doing well, we often communicate together.”

“You talk to each other? It is not possible when they are so far away.”

“Ever heard of telepathy?”

“Tabby, I think you are having me on.”

“Think what you want to. We felines are in charge, we are the champions. And now do something useful like preparing a dish of tuna fish.”

“Of course Tabby, at once.”