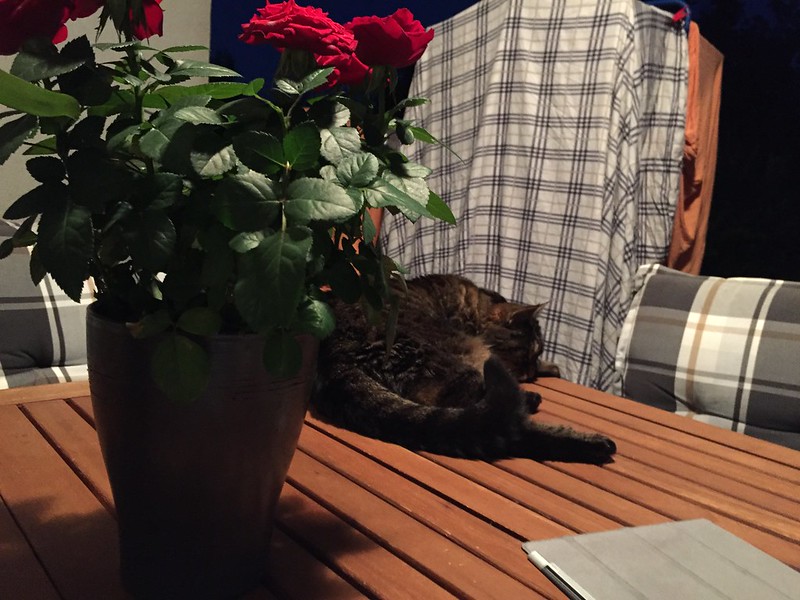 “I am not being complicated Mrs. Human, I am in a comfortable place preparing for my afternoon siesta. It is the humans that are complicated interpreting my sleeping endeavours to be complicated, and we feines are straight forward and logical.”

“If you were logical Tabby, you would sleep during the night and stay awake during the day.”

“No, Mrs. Human, that would be human logic. When we took this planet over we were very much confused by the human way of life. It all began in the corn chambers where there were more mice than you could count. Bastet soon got us organised and no feline had to go hungry in those days and the mice soon disappeared. With the years we felines had to train the humans as things were changing. However there are still complicated humans that are of the belief that a feline sould eat sound vitamin enriched food. I would not disagree, but there are limits. Buying a large plastic bag filled with tasteless pellets of various flavours, under the belief that “they are good for you” is not logical and far too complicated for a feline to understand.”

“Tabby, we have heard that story before. For us humans it is uncomplicated. We do not have to worry that our feline leaders have no food. We can fill the bowl and there is always something to eat. I have no worries that you would be hungry.”

“OK, I get it. The pellets are just an excuse to forget the feline, that was once worshipped as a god: anything will do.”

“No, not really, Now and again you have a treat and I open a tin of tuna fish, perhaps you even receved a snippet of meat from my own table.”

“Exactly, we are reduced to begging felines waiting for few scraps from the human table. known as “treats”.  What an insult to our nobel race. Humans should realise that without us felines they would have no purpose in their lives. They would be confused because our straighforward logic would be missing.”

“Sorry Tabby, but I have difficulty in following the logic of this conversation.”

“Now you are adding insult to injury Mrs. Human. We felines invented logic. As the Italian gatto di tutti gatti Luigi Pirandello said “Logic is one thing, the human animal another. You can quite easily propose a logical solution to something and at the same time know in your heart of hearts it won’t work out.”

“Tabby sorry to correct you but I think he actually said “hope” in your heart of hearts and not “know”.”

“Let us not discuss such mere details. I find this sleeping place to be the most logical at the moment for me.”