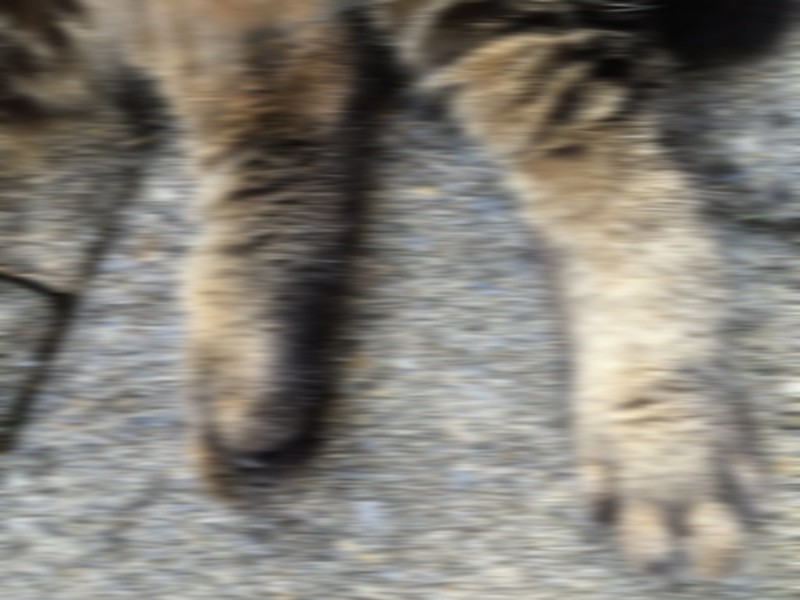 “Mrs. Human, they are coming to get me.”

“Who are coming to get you?”

“Them, they, all of them, the ones we do not see, unless they want to be seen. They have no head, no tail, just paws, that tread lightly and pounce in the dark. The outlines are very misty, and they only appear when we sleep.”

“Then it is just a nightmare Tabby, and nothing to worry about. We humans often have nightmares.”

“You cannot compare a majestic, once-worshipped-as-gods feline with a mere human. We do not have nightmares, because our sleeping constuction does not depend on night, but when we must rest our brains to collect energy for our waking times. We have permanent mares. Do not forget a feline sleeps 23 hours and has only an hour spare to eat, drink, and search for a sleeping place. We have meowmares, and when they arrive they are not just something to ignore, or a mere mist in the darkness of our sleeping hours. We must be aware of them and do what we can to stop them taking over. Look Mrs. Human, over there in the corner, you can see them.”

“I see nothing Tabby, just an empty corner, and an old spider’s web, which I must clear away.”

“No, Mrs. Human, they are there, the paws, waiting to pounce. What are you doing with that brush?”

“I am clearning the spider’s web away.”

“No, be careful, they might grab you as well and what shall I do then? I will have no human slave to empty my recycling tray or fill my bowls with food.”

“No worry Tabby, Only felines have meowmares, humans have nightmares, and they only appear at night when we sleep.”

“How do you know Mrs. Human? You have no idea what prowls and paws it way around in your bedroom when you are sleeping.”

“Neither do you Tabby.”

“But I hear things inside your bedroom when you are sleeping: strange low noises, as if a saw were in operation. Beware, they are the body snatchers, planning to take you away. And then what would I do? There is only one remedy Mrs. Human, to keep us both safe. You leave your bedroom door open at night and I will keep a watchful eye on you.”

“But the paws, Mrs. Human, think of the paws – they will come and get you.”

“No way Tabby, we humans have hands with opposable thumbs to be able to use tin operners to open the tins of tuna fish – remember.”

“Ok, Ok, it was just a try, but the paws are still there you know.”

Daily Feline Prompt: The Ghost of the Paws

7 thoughts on “Daily Feline Prompt: The ghost of the paws”