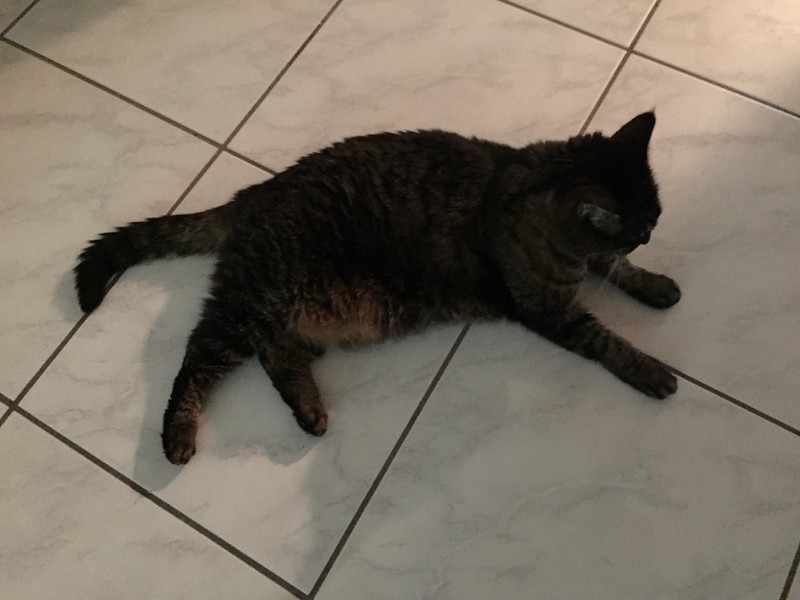 “Too hot outside Tabby?”

“I decided for a change of scenery Mrs. Human. It was becoming monotonous every day laying on the same patch of lawn outside.”

“I thought you were cooling down on the tiled floor.”

“I must admit it it more pleasant at the moment. I would have been also more pleasant, had you left your bedroom door open during the night instead of closing it and ignoring my heartfelt pleas to let me in.”

“I was sleeping Tabby and did not hear you.”

“I heard you breathing Mrs. Human, so you were alive and could have made the effort to release me from the torture of being isolated with no protection. I was in danger and you ignored my hearfelt meows. I could have been kidnapped.”

“I do not think there was a danger of kidnapping in the early hours of the morning Tabby.”

“There, you have it. You heard me and ignored me. How could you otherwise know it was the early hours of the morning.”

“Yes I know Tabby, but I really wanted to have a quiet sleep. We had a very loud storm in the night which awoke me.”

“And me, outside on the porch. The sky was attacking me with noise. I had to run for my life through the cat flap.”

“Oh, that was the noise I heard. You could have entered the cat flap without such excitement.”

“Mrs. Human, they were after me, I was escaping.”

“Who was after you?”

“Those that came from the sky and made loud noises. Afterwards water began to pour from the sky. Were it not for the cat flap they would have taken me, I would have disappeared, transferred to another world. All because of you.”

” I don’t see how it was my fault. It was a plain storm which occurs now and again and you were safe inside.”

“That is not the point. I was ignored, my survival chances were at a minimum because you kept the bedroom door shut.”

“Don’t overdo it Tabby. This morning you were sleeping in your usual place on the chair outside on the porch.”

“It had stopped raining and the storm left.”

“I think you were overdoing it a little, just a little cheating.”

“Well just imagine that, it doesn’t exist in human either.”