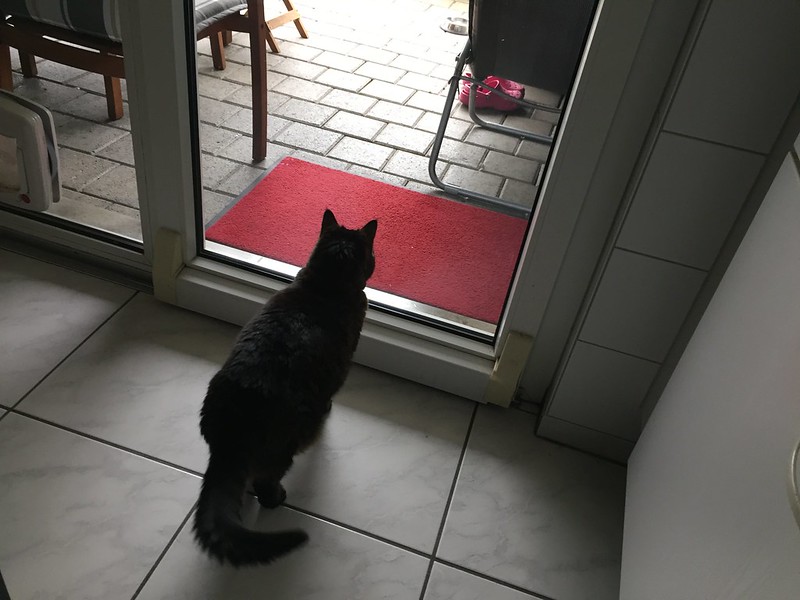 “I am thinking about it Mrs. Human. It is a small step for a human, but a big step for a feline.”

“But you can go through the cat flap on the other door.”

“And then it is even a bigger step. Perhaps you could open the window, it would make things so much easier.”

“But you have your own door Tabby and can come and go when you please.”

“And what if the cat flap does not open?”

“There are always exceptions to the rule. I was returning one night and you were not here to hear my plantiff meows calling for help, because the flap did not open.”

“The flap always opens. You have a magnet attached to your collar and if you enter in the correct position it open the metal edge of the flap. It is absolutely fool proof.”

“But not feline proof. I had to try at least ten different positions until the flap opened to align the magnet to the opening position. I think it would be a better system if you could attach some sort of bell that would ring when I want to enter.”

“No, Tabby, I will not rise in the middle of the night to let you in because a bell rings. You have your own cat flap with magnet operated opening system, the same as all other felines that have a cat flap. There are borders to my patience.”

“Borders do not exist in meow, unless in connection with territorial rights and do not change the subject. I have decided to go out so open the window. As the great Pablo Paws Casals said “The love of one’s territory is a splendid thing, but why should love stop at the window?” which is what is now happening. I am now departing, so leave the window open as I will be back some time later.”

“But it is cold outside Tabby.”

“No problem, I am always wearing my fur coat.”