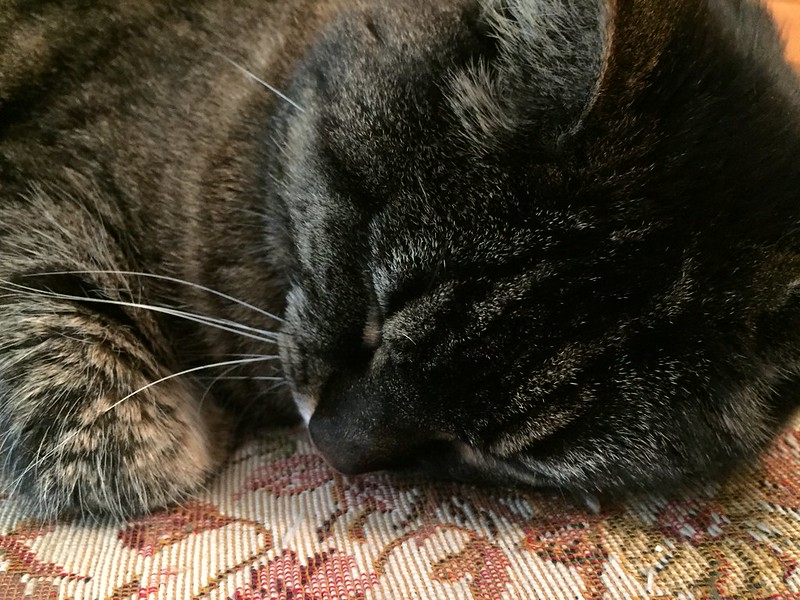 “Do not Distrub Mrs. Human. I have to take a rest it was a hard day’s night.”

“I noticed you were out for most of the night. Where were you?”

“The mice were moving and it was time to discover their underground life.”

“And you went underground?”

“Are you mad? Felines do not go underground, we wait above until a mouse might appear, unknowing that I will be waiting.”

“And did they appear?”

“That was the problem. They remained underground. I could feel their movements with my paws, I even reached into a hole in the ground, and felt their fur, but they disappeared. I think they are preparing for their long Winter sleep. I have decided that is not a bad idea. I think I will join them, in a feline way of meow of course. A well known feline once said “The feline one day falls through a hole in the cat mint, and from that moment he is following the dark rapids of an underground river which may sometimes flow so near to the surface that the laughing mice are heard above”.”

“Very philosophical Tabby, but what does it mean?”

“It means that I am now falling into a deep sleep and cannot concentrate because of the noise you are making.”

“But I was just opening a tin of tuna fish.”

“Aah, in that case I will postpone my underground sleeping adventures until later. Be careful where you walk, there are some lotus blossoms laying on the ground from my paws.”