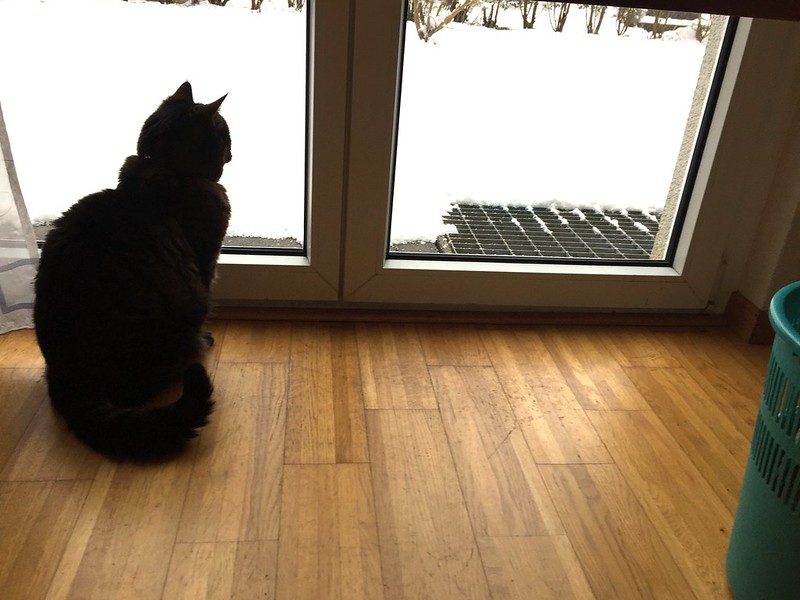 “Mrs. Human, are the windows and doors locked?”

“Why do you want to go out for a nice walk in the fresh air.”

“You must be joking. We are under siege, we are being attacked by the white peril.”

“But tabby, that is only snow, it is like frozen water and will melt as soon as it hits the ground.”

“That is what I mean Mrs. Human, it “hits” the ground, it is dangrous. After my success battling against the leaf soldiers in that thing you call Autumn, we now have the Winter battle, the fight to end all fights, everything covered in a white layer of who knows what. It even forces water to turn into something hard and undrinkable. It transforms everything into a solid mass, infiltrating the body and coating it with a white layer.”

“But it is not dangerous Tabby and as soon as the sun shines on it, or temperatures are warmer, it melts.”

“Huh, that is what you say, but the truth is that it will be lurking in the undergrowth, behind a stone, even on a tree, waiting to attack again, as soon as it is again transformed into a solid state. No, Mrs. Human I do not trust this snow.”

“Of course you could go out and try it for yourself, Tabby. You will get wet paws, and might even leave an impression on the snow, but it is not dangerous.”

“Are you serious? I could conquer the leaf soldiers and kill them by pouncing on them. Try pouncing on snow. It disappears, it is elusive, sneaky and dangerous. It assembles somewhere in another place and attacks again when it is ready to attack. There is no escape Mrs. Human we are doomed.”

“I always thought you were such a brave, dauntless feline. Even the birds are flying through the snow and they are not afraid of it.”

“Of course, the snow has recruited them as their fifth column. They are the snow spies, reporting where there is a feline so that an attack can be planned.”

“So what are you going to do about it Tabby?”

“I will take a sleep I think and think it over. It might go away  in the meanwhile. Mrs. Human, just keep an eye on it. Clear a path through the snow so that I can again walk in my territory without getting my paws wet or cold. I have recruited you Mrs. Human, as my vice commander in the war against the snow flakes.”

“Oh, thank you Tabby, that is an honour.”

“Of course, but make sure you do not get mortally wounded, I need you to serve my food this evening.”