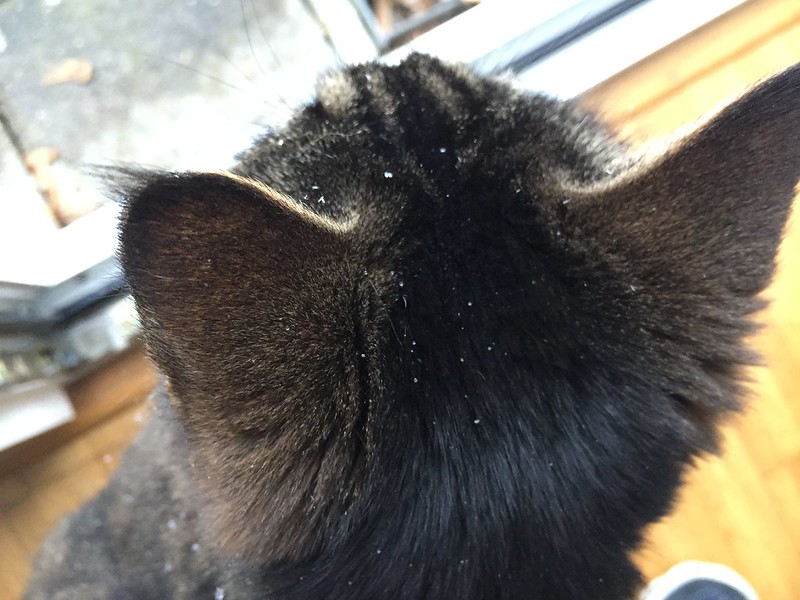 “Mrs. Human, Help, I am being attacked.”

“No of course not, felines are predictable. Another feline makes a hiss as a warning and pawswipe and that is no problem as long as there is a cat flap near for a quick retreat. A dog can be more of a problem, as they are unpredictable, you never know what they are thinking – you might be a good meal, and they start licking you all over your fur. Again if there is a cat flap nearbye, there is always an escape route.”

“So what is the problem?”

“The snow has returned and it is dropping from the sky. It has attcked me.”

“Where, I cannot see any injuries.”

“Look on my fur, it is sticking to my fur and probably thinking out the best plan of attack.”

“Tabby, snow cannot think, it is not alive.”

“Of course it is alive. It moves, it drops from the sky and it is planning to destroy all life of earth. When you go out in the snow, you protect your head with a hat and strong shoes. Even a human must be careful with the snow.”

“Of course Tabby. If it is cold outside it can freeze and you can slip, so I have to protect my feet with boots.”

“And me. I only have my paws, I could get pawbite from the cold and I can also slip.”

“But you have claws to grip on the ice and I have no claws.”

“Another imperfection of the human race. Look at my fur, the snow is already arriving on my head. I am in danger.”

“Then come inside instead of hovering at the window.”

“At last, look it has disappeared from my head, I won the battle. No matter what you say, snow is a living thing. It changes its shape. This morning it was tiny drops, and now it is a mega size, enormous, it could knock me unconscious.”

“Do not exaggerate Tabby.”

“Where has the snow gone, is it hiding?”

“No Tabby it has melted.”

“But look over there, there is a man made out of the snow, I am sure it is the leader of the snow army.”

“That is a snowman Tabby, the children made him with their hands.”

“Oh, are there snow cats as well?”