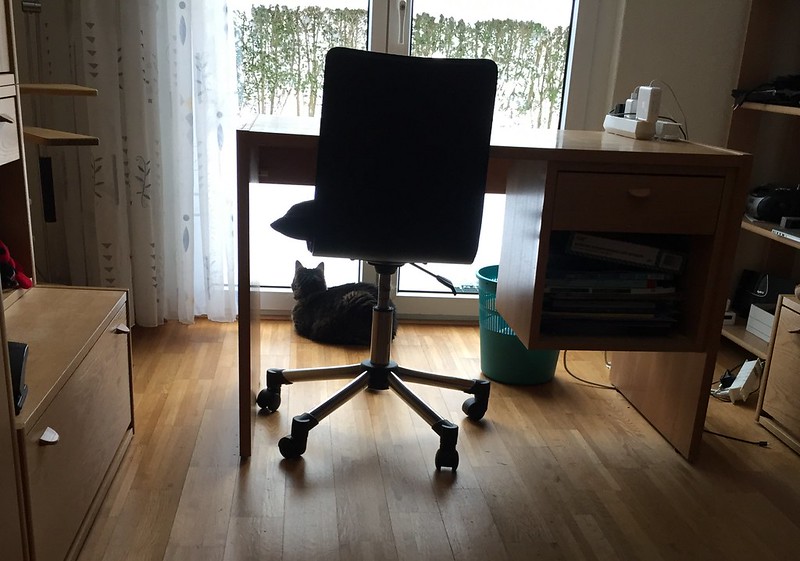 Can you see me? This is an exquisite place to sit and watch the birds go by. They do not know I am there watching their every move. Of course I could leave my comfortable place in front of the window, but I prefer to concetrate my feline thoughts. Ok, there is too much snow outside at the moment. Mrs. Human said it is here to stay for a week. Not knowing what a week actually is, I have decided to bide my time until the snow goes away. In the meanwhile I can guard my territory from the safety of my own realm.

Yesterday evening, I decided to leave through the cat flap. I gathered my courage into my four paws and stepped outside. I heard Mr. Human say to Mrs. Human “she will not be out there very long” an so I decided to stay outside, just to show them how strong and courageous I am. After a whle I decided I had taught them a lesson, and they were probably worried that something had happened to me and waiting for my return. I waited for a while in front of the window door, but no-one came to welcome me. I was being ignored, me the most exquisite, special, charming feline in the neighbourhood. I was a no-one. They were not worried about my welfare and both humans were sitting in front of this television thing, Mrs. Human reading a book, but I was being ignored.

I deicded it was now or never, so I stooped to employment of the cat flap. It took me at least two minutes to open the flap. I have this magnet thing on my collar and I have to line it up with the frame of the cat flap in exactly the right position to open it. That is why I find the humans should really be more co-operative when I want to enter.

Eventually success, and wih a force of the nose the flap opened. I though my humans would come running to stroke me, put their arms around me, shower me with tummy tickles – but no, they were still staring into this TV thing. I decided that punishment was now called for, so I made myself comfortable in their recycling room, in front of the recyling bowl on a carpet, and decided not to move under any circumstances.

I was still being ignored, so I retired to my favourite sleeping cushion, but not without depositing a hair ball in a strategic position before I went to sleep. That did the trick, there was human voice noise, excitement, usage of paper wiping away the traces. Who cares, I slept on, I am Tabby the invincible, the exquisite feline and of course, unique.