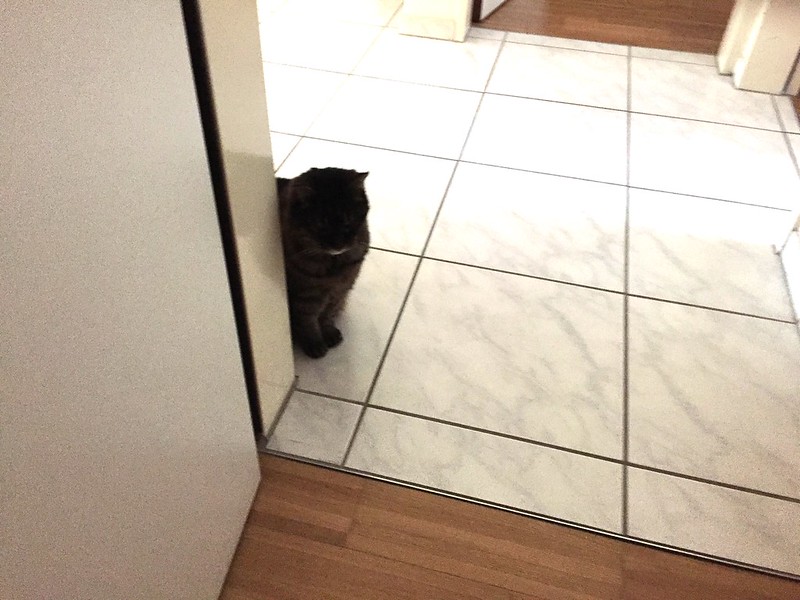 I am completely exhausted. It all began in the morning when I heard Mr. Swiss moving in my territory. That usually means he does human things like drinking coffee and feeding birds. I love the part with the feeding birds, but as soon as I appear they fly away – no idea why. So Mr. Swiss returns and I begin my day of hard work. My paws are tired, my whiskers are drooping. I had left my No. 1 sleeping position, the one where I curl up and bury my head in my paws and had taken some refreshement. Believe me it is hard work chewing on those vitamin pellets, but early in the morning humans are not capable of serving anyhing better.

It was time for phase 2 of my marathon day, and so I decided to make myself comfortable on Mrs. Human’s grown up kitten’s bed, as he was not there. This time I repeated the curling position but anticlockwise. My first laps of sleep are usually clockwise. A few hours later I realised that there was again movment in my household and decided to make investitgations. The remainder of the vitamin pellets in the bowl had been topped up with a new layer, full of tempting bait, so I decided to take a sample. I forced them down my throat, but due to the exhaustions of eating, I decided to partake in lap 3 of the daily marathon. This time I decided on a stretched out position in the bathroom on the nice fluffy carpet. Of course I checked first of all that my humans had already had their daily lick from the shower.

After another few hours, I was ready for something completely different. Perhaps a walk, but the dreaded enemey was still waiting for me outside. Everything was white, full of snow. I had no chance, so decided on No. 4 marathon, but this time on the nice comfortable settee with my favourite blanket. Did I hear the sound of a tin opener. I forced my eyes to open and entered the kitchen to find a bowl of yes, tuna fish. It must be that day of the week I thought.

After completing my meal, I was weary, absolutely tired out, no strength left. Marathons can be exhausting, expecially when combined with sleep. I sank into my favourite cushion at the top of the cupboard and decided to stay awhile and then I heard Mr. Human in the kitchen again – was it really already the next day, yes time flies when you are running marathons all the time.