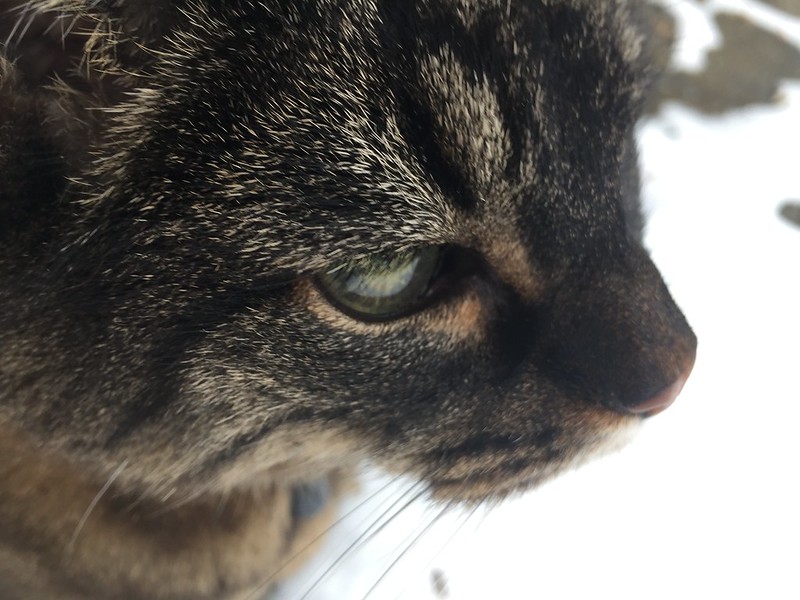 “And as the bravest of all felines took a step onto the frozen layer of snow, she knew she had conquered all obstacles. Mrs. Human was there to take a photo of this memorable moment in time, a symbol for all felines, yes we can do it.”

“Err Tabby, don’t you think you are overdoing it just a little bit.”

“I am not overdoing anythig Mrs. Human, they are the closing words of my newest publication “The Call of the Feline”. I have decided to record the details of my battle with the white death.”

“You were fighting a battle?”

“This was not an easy task Mrs. Human. One day I arose from one of my beds, I am not quite sure which one, but I think it was the one on top of the wardrobe. I descended and found it was time to take some fresh air. It was then that the truth hit me, fresh air was combined with a risk. Outside everything was white. Where was the usual friendly, inviting brown surface of stones and earth? Where was my favourite tree? Everything had been transformed, there was a new evil sent into this feline world and it was cold. It froze my paws at a touch, my whiskers were becoming brittle. It was then that I was forced to retreat.”

“That is true Tabby, you did retreat for at least a day.”

“Almost a day Mrs. Human. I did not give up immediately. I needed time to think about it.”

“And did that help?”

“Of course, a feline always thinks things over. We do not dive into risks with all four paws. The second day arrived and the dreaded white curse was still laying across the feline land.”

“Yes, that was the beginning of the second chapter. I wanted to build up the suspense to keep the reader interested in my fate.”

“I thought about it again (third chapeter)”

“It seems to me you were thinking about it a lot.”

“Of course. Everest was not conquered by taking a walk, it all had to be planned. Equipment had to be organised, tents had to be placed in strategic places.”

“How did you manage on the journey Tabby, did you have a tent.”

“You cannot compare Mount Everest to my territory. I did not need a tent, I managed to find shelter beneath the remaining parts of the hedge. I also found the container for garden rubbish offered some sort of protection. You are breaking my concentration Mrs. Human.”

“To continue: the brave feline fought its way placing one paw carefully after the other and praying to Bastet that he would not sink so deep that his disappearance would not be noticed until the warmer weather returned. Bastet was with me and I crossed the snow fields unscathered.”

“I must have missed that part Tabby. I thought you only pawed your way to the path and back, where there was no snow.”

“I will ignore that last remark. And now for the final part, a photo of me against a background of snow, after completing my journey into the unknown white world.

My memoirs of this journey to the unknown are now available. Orders may be placed on my Pawbook site. 5 tins of tuna fish for one copy of my book and if you wish for a personalised copy complete with paw print, it will be two tins extra.”

“Of course, I now have to recover from the exertions of writing.”

“I was thinking about it “How I managed to rescue my hairball after being covered by an avalanche”.”

“I am sure that will be exciting, definitely a best seller.”