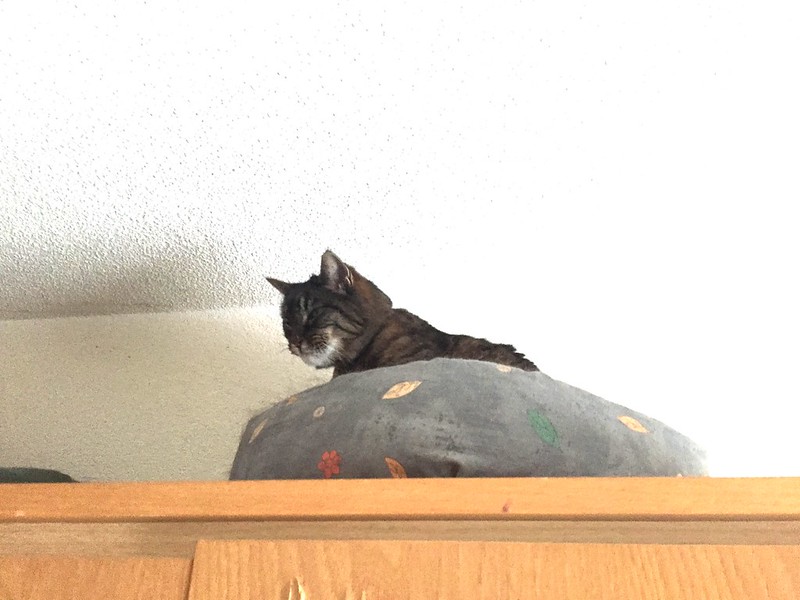 “Mrs. Human, you can change that heading on my blog. Felines do not make oversights, it does not exist in meow. We do everything with a purpose.”

“So you intentionally slept on the top of the cupboard. I thought you now preferred to sleep on the settee.”

“It is a matter of how the mood takes me. I decided it was time to see the world from above and how it was developing. You get a completely different perspective if you look down on things, although it is also a matter of interpretation. Even humans tend to see things as they want to see them. I read of an important human that estamated from looking down, that he was the most popular human in his job, because everyone wanted to see him.”

“And what did you deduce from that Tabby?”

“He was wrong, there were spaces in between where the grass was being covered up to protect it, but there was no-one to protect it from and so he had made an oversight. He was not as popular as he believed he was although he still thinks he is. So are the humans, they see things they want to see.

I do not have this problem Mrs. Human, from my perch up here I see my queendom that stretches as far as I can see. My food bowl in the kitchen, my chairs in the living room, and my beds in the bedrooms. I can even see my territory outside, which is still covered by the dreaded snow.”

“It is not all yours Tabby.”

“Of course it is, I just let my staff use it to keep them near so that my wishes can be fulfilled.”

“And now I will descend.”

“Be careful Tabby, take the stairs. No, do not jump.”

“No problem Mrs. Human, I am feline and feline is all powerful, as I said we make no oversights. That is probably one of the basic differences between humans and felines.”

“Yes, Tabby I am sure you are right.”

“So where is the tuna fish, I am ready to eat.”