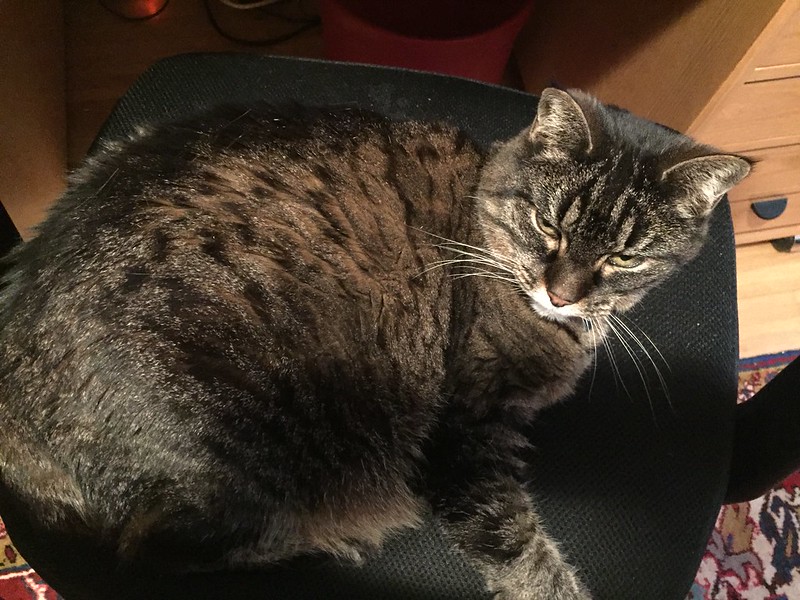 “10 little felines sitting on a tree, one fell off and then there were three.”

“Tabby what is that supposed to be?”

“That is my poem for today’s prompt.”

“But it does not work that way. If there are ten cats in a tree and one leaves the tree there are then nine cats left and not three.”

“It is human logic Tabby.”

“Yes but it is not feline logic Mrs. Human. If I said “then there were nine” it would not rhyme with tree.”

“Then you will have to alter the words to something that rhymes with nine.”

“Ah, I see, someting like “10 little felines sitting on a sign, one fell off and then there were nine” – is that logical enough.”

“It rhymes, but it is not really logical Tabby, because there would not be enough room on a sign for ten cats and why would they sit on a sign.”

“But why would they sit on a tree. Chances are that that if they climb the tree, they would be risking a life to return because climbing down trees is not a feline thing. We only climb up. Sitting on signs is more sensible, they might not be so high.”

“But felines do not sit on signs usually.”

“That is because they prefer to sit on trees and sign rhymes with nine, or perhaps they could sit on a line?”

“No Tabby that does not make sense. How can 10 cats sit on a line, it means having room and width for 40 paws.”

“It’s a stupid prompt in any case. It only makes sense if you have 10 tins of tuna fish in the cupboard, or 10 catmint twigs. Of course, I might have 10 whiskers although now and again I lose one. Mrs. Human, I find this prompt not such a sensible prompt, but wait I have the solution “10 little felines sitting on a tree, 7 fell off and then there were 3″ now that is perfect.”

“Yes Tabby, great, but you did not say why each cat fell off to complete the poem.”

“Mrs. Human, if you want some cat logic, we do not fall off of trees, because we have claws on our paws to maintain a grip on the tree, so the whole thing is no logical, human or feline and lets forget the whole thing. Where’s my food bowl with the tuna fish, now that is logical. “One bowl of tuna fish looking very sweet, one is enough for Tabby to eat.”