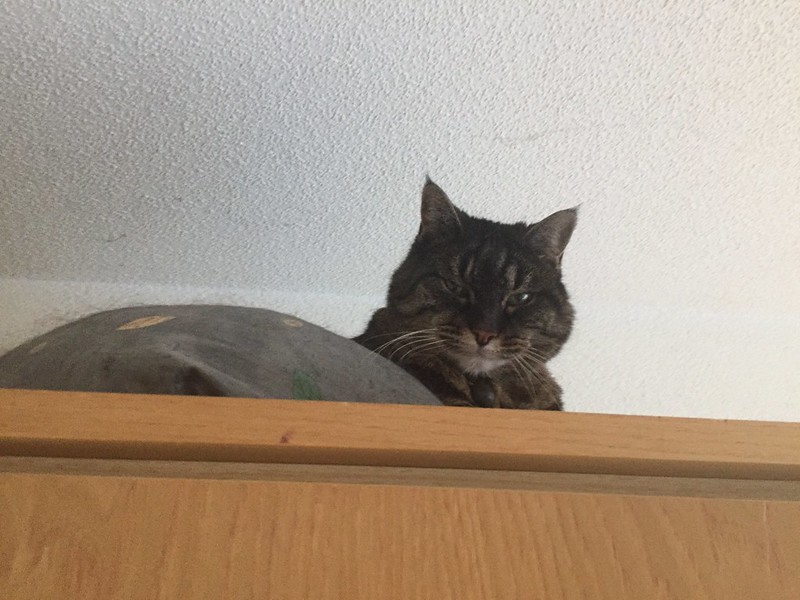 “Tabby since this morning you have been sleeping in your cushion on top of the wardrobe.”

“Mrs. Human, I was tired and had some sleep to catch up on.”

“Yes but you have been sleeping for at least 8 hours.”

“Oh, then I still have another 4 hours to do. I had an exhausting day yesteray, full of stress, so I had to compensate today.”

“I found yesterday was quite an easy day for you. You did not have to do anything, Mr. Human did it all for you. He put you in your carrying cage, took you for a car ride, which you enjoy and afterwards you were spoilt by the lady at the vet, who said what a well behaved feline you were.”

“Of course I was well behaved, if you make a fuss at the vet they keep you and make more examinations, it is all a psychological game, and you must always be one paw ahead. It was very exhausting. It is all a question of being the subject of Schoedinger’s quantium mathematical theory. We felines have it in the paws. Erwin Schroedinger is the only human, who happend to have been taught by one of my ancestors, that said “A feline that embarks on forming states without greatly restricting egoism will perish” and we felines are the born egoists, we invented egoism and so we are the great surivors.”

“That is true Tabby, I must admit. So what are you going to do now that you are awake.”

“That depends, is the evil snow still here.”

“No it has gone, just a few remainders that are dwindling.”

“It just melted away.”

“Then my fight was a success?”

“Yes, all a matter of quantum feline mathematics, according to my ancester Feline Schroedinger.”