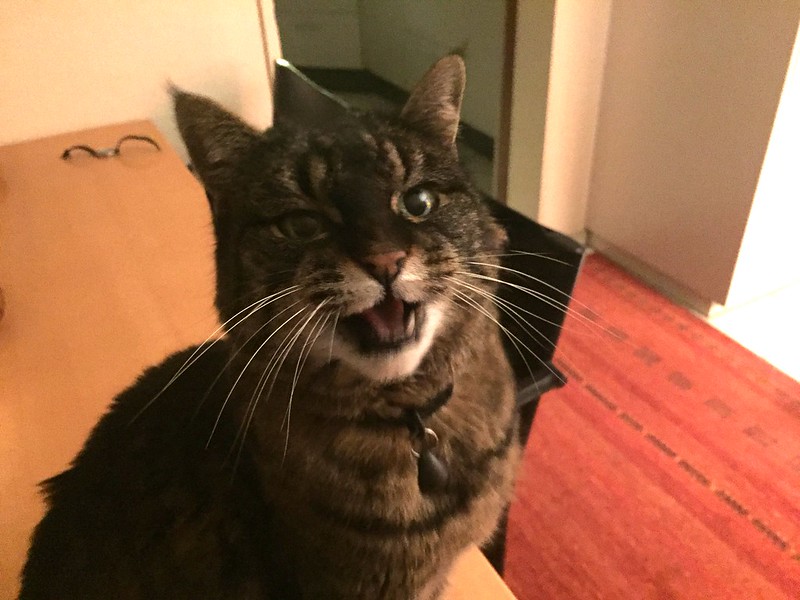 As you can see this was the portrait that made me famous through the feline world. My uncle the great Edvard Paws Meow Munch painted the portrait of me, known as “The Hiss”. It hangs in the Feline Portrait Gallery in the old country, next to the statues of my ancestors that were worshipped as gods, as we all know. If I had lived a million years ago, I would also have been worshipped, although my god status remains and waits for the day when paws will get opposable claws to use the tin opener. Until that day I can wait.

So yes, back to my famous portrait. It has been the subject of many examinations as to why I was hissing. Was there danger of an attack from an unknown feline, was my food bowl yet again filled with hard, unappetising vitamin pellets, or did Roschti, the feline from next door, invade my territory. It was none of these reasons. I hissed because I wanted to hiss. There does not have to be a feline reason for hissing. If I feel the urge, want to attract attention, find that Mrs. Human is becoming lazy, I hiss.

Many discussions have arisen when studying the details of my hissy face. Even my MacDonalds “M” design was distorted by this hiss. It was a hiss from deep down in the whiskers, not just a hiss, but a resounding hiss, one never to be forgotten and for this reason Uncle Edvard captured it on canvas – a very realistic effort. He is now repainting the background on the painting. He found that a framework of catnip, should be added and perhaps a river where tuna fish can be seen swimming.

Now one of the mysteries of this well-known work of art has been aired.