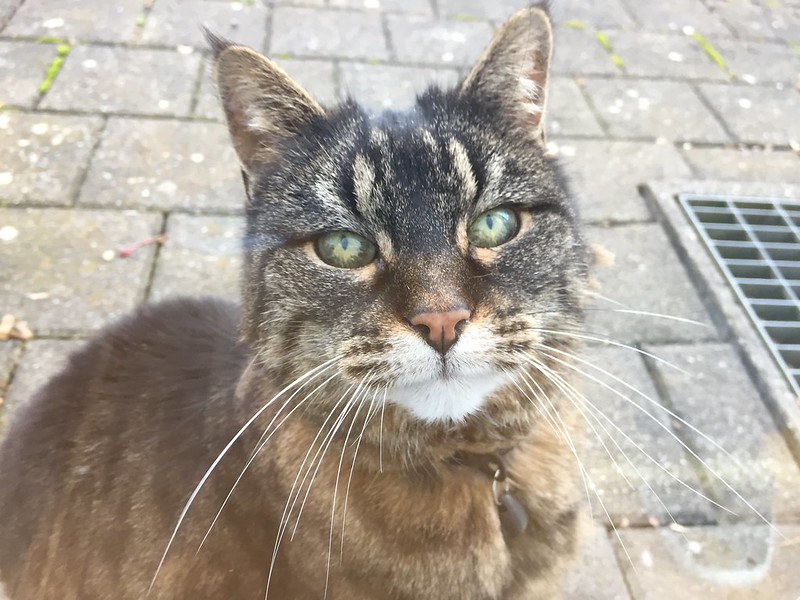 “What are you doing Tabby?”

“I am measuring the size of my territory. It’s shrinking Mrs. Human.”

“That is not possible Tabby.”

“But  there are less leaves on the bushes than last year. Someone is stealing them.”

“Tabby that is because the leaves fall from the bushes in Autumn and have not yet regrown.”

“No, Mrs. Human, You have got that wrong. The leaves are soldiers defending my territory but they are cowardly leaves. They fall from the bushes in Autumn and do not return. I try to stop them by pouncing, but it seems they escape.”

“You mean there will still be enough leaf soldiers to guard my territory this year. Perhaps I should not kill so many in Autumn when they attack.”

“They do not attack Tabby, it is natural that the leaves die in Autumn to be replaced in Spring by new leaves.”

“You mean they re-incarnate.I believe in reincarnation, and I believe I’ve lived quite a few lives, already at least four, another five to go.”

“Yes Tabby, and you have braved many battles with the leaf soldiers.”

“But they do not die, I kill them when they retreat. Perhaps I should let them live. They would then remain and there would be no need for re-inforcements.”

“That is nature Tabby, the leaves die and new leaves appear.*

“You mean all the fighting and defence organisation was for nothing in Autumn. They always return. And what about my territory?”

“What about your territory?”

“It is smaller, shrunk, bare – I have no leaf soldiers to fight for my rights.”

“Don’t worry Tabby, you have me and Mr. Human to look after you.”

“Yes that is true, perhaps you could begin your feline care programme by serving a dish of tuna fish.”