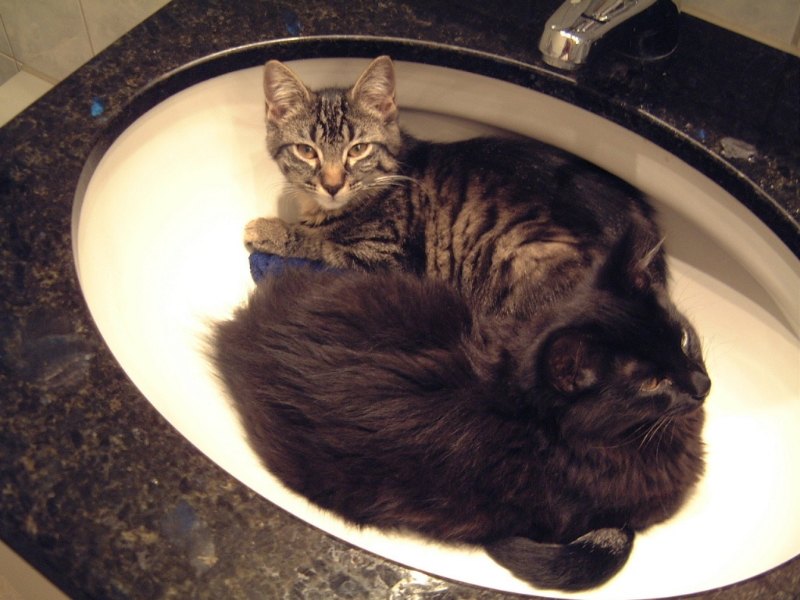 I remember my kitten days, they were full of new experiences. There were four of us I think, but only Nera and I were left, the others found their own human slaves, but so is the life of a feline. I even remember the day I was born. I was to be the first to arrive, the litter chief, so I was waiting to go. I could even see some light at the end of the tunnel and was ready, when I was overtaken by something big, black and fluffy. Yes, that was my litter sister Nera, she wanted to be the first. I felt a paw pushing me back to the last place in the line. It was Nera first, she would meow while we were all waiting, I should have realised then that she would be in charge.

She wasn’t even my real sister, we just happened to have the same mum. Now my dad was one of the active felines, always on the run from something. Mum said his name was Charlie and he looked like me and when she was ready, well he was ready as well. However, a feline is not made for eternal love, and so mum moved on to the next in line on the rooftop, or was it in the garden, cannot remember. Anyhow there  was a big black fluffy cat. He didn’t have a name, and they called him “The Boss”. He looked at mum and she fell with all her whiskers, and so Nera was born, my half litter sister – you know we felines are not so serious about the ancestry, we like variety, at least mum did.  I am not sure about my other two long lost brother and sister, but they did not resemble us either. Some to think of it, we all looked different. Yes, mum was quite a girl in the neighbourhood, they all knew her.

But she looked after us, although I remember that Nera was always first at the milk tap. I always had to wait until everyone was finished, but mum always kept some for me. She said I was the wisest of them all. It seemed I got that from my dad, Charlie, who was also known as the “consiglieri” amongst the other felines. He was in charge of the catnip handle and even dabbled a bit in Baldrian, yes he was always on a trip somewhere.

And so I was born. Nera and I took over the same human. Nera decided to stay with me, as I could advise her on manipulation of the humans. I would sit and stare at Mrs. Human and apply my influence on her actions. Then came the day when Nera was called to the eternal corn chambers, I warned her that she had used 8.1/2 lives, but she would not listen. However, now and again she reports back and tells me that living the tenth life is fun. There are always enough mice, they re-incarnate themselves daily. She said even a river runs through it, full of tuna fish – the real thing.

In the meanwhile I am now respected in my place as the influential one. I do not meow  very much but just keep a watchful eye on Mrs. Human and control her thoughts now and again, to ensure that they are to my advantage.