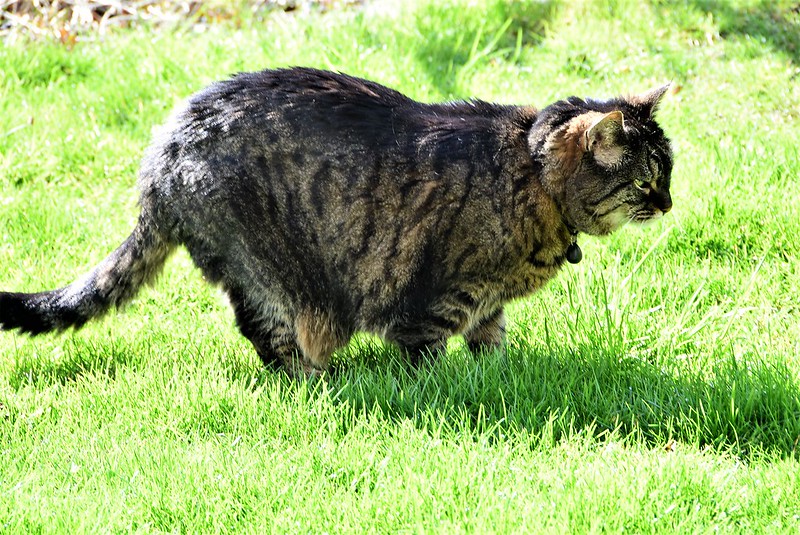 Of course I have patterns, you must know that the tabby feline is a speciality of the feline race. Each stripe has a meaning, but unknown to humans. We were the first felines, yes tabbys first.We were the first, the prototype for the feline race, but only we have the MacDonald’s “M” on the forehead, meaning mighty, marvellous and magnificent. Mrs. Human thinks we were just part of a MacDonalds advertising campaign, but jealosy knows no limits. I am sure she also wishes to have a unique Macdonalds “M” somewhere on her body, but no, it is reserved for the tabbys of this world.

The legend tells that Bastet was born in an Egyptian pyramid where she found herself together with the pharoah wives, that were also pyramidisised to prevent heir pharoah being alone on his journey to the next kingdom. To stop the pharoah wives from dying of hunger, they began to cook the food left for the pharoah to embark on his next journey. The ladies soon discovered that pharoah would no longer be needing food as he was wrapped up in cloth and was in any case just a shell without any digestive organs.   So they devised various recipes to cook the food, and the hamburger was born, made from various spieces, vegetables and above all camel meat. Bastet being blessed with magical powers, waved her magic whiskers over the food and an aroma arose, pulling all humans into its ban. It even gave the ladies strength to break down the walls of the pyramid and so Bastet escaped.

On the way out she brushed against the fire tongs where the hamburgers were being grilled and it left an “M” mark on her forehead. However, undaunted she continued and arrived in the chamber were the Egyptian slaves were storing the grain. This was paraidse, she saw thousands of mice munching their way through the grain and decided this would be a change from the etneral camel meat hamburgers. And so Bastet grounded the tabby race and they multiplied – each kitten with a Macdonalds “M” on its forehead.  She was also honoured as a chief goddess, saving the humans from hunger by destroying all the mice that were eating the grain. At least that was the story my mum told me and we all know mums always tell the truth.