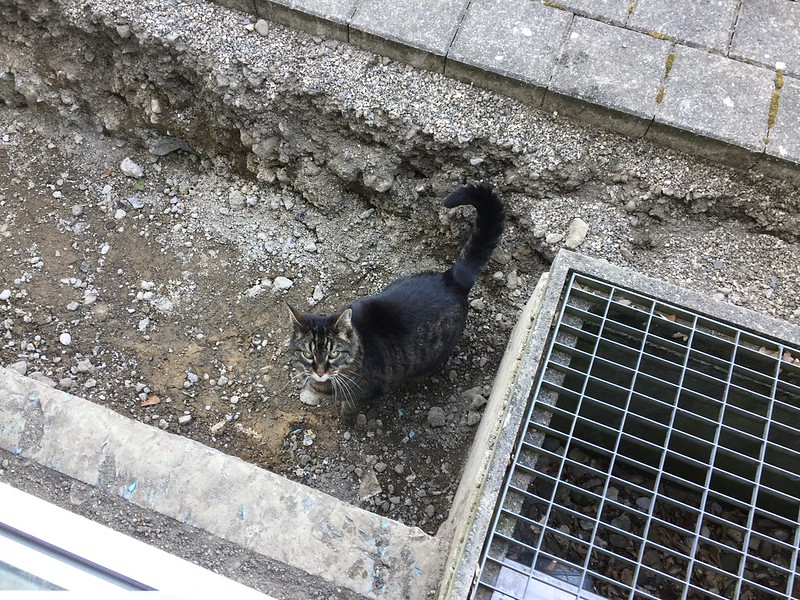 Now I don’t mind telling you, that things around here are not what they used to be. I had a nice comfortable regular life, as would befit my existence. My ancestors were worsipped as gods, which was rightly so, and now  my regal condition as been reduced to climbing over a ditch to get to my own property.

It all began some time last week. I was just settling into a comfortable sleep, as is my custom just after dawn and there was a noise in front of my window. My window, the place that should always be quiet and settled. There were men that began to make noises. Even a human voice with its coarse booming tones is a disturbance, but they had machines as well. They do not even make ear plugs for felines, which I should look into, as this noise continued for a complete week. Luckily my dining room was on the other side of my living quarters. Mrs. Human said something about this state of affairs continuing for the next 6-7 months. No-one asked me, again I had been ignored.

When this interruption to my life was finished the workmen departed and left a ditch, a deep ditch. I was now forced to jump into it to leave my premises and climb to arrive in my territory. What a humiliation, although the feline next door told me it had happened to his territory as well. War has broken out, and we felines must defend ourselves from these irrational attacks, but Mrs. Human said everything would return to it normal state in 6-7 months. We felines do not live with months, but lives, and I am hoping, keeping claws and paws crossed, that I will not use up my ninth life, before this distrubance is finished.

I noticed that the workmen have left me with a platform to cross the gap between my territory and home. I also noticed that the feline next door does not have such a platform, so at least they respected my higher status. I am not used to looking up at things, but looking down on everything, due to my higher situation in feline life. In the meanwhile I have to put up with this humiliation, but I will return. It is cats first after all.