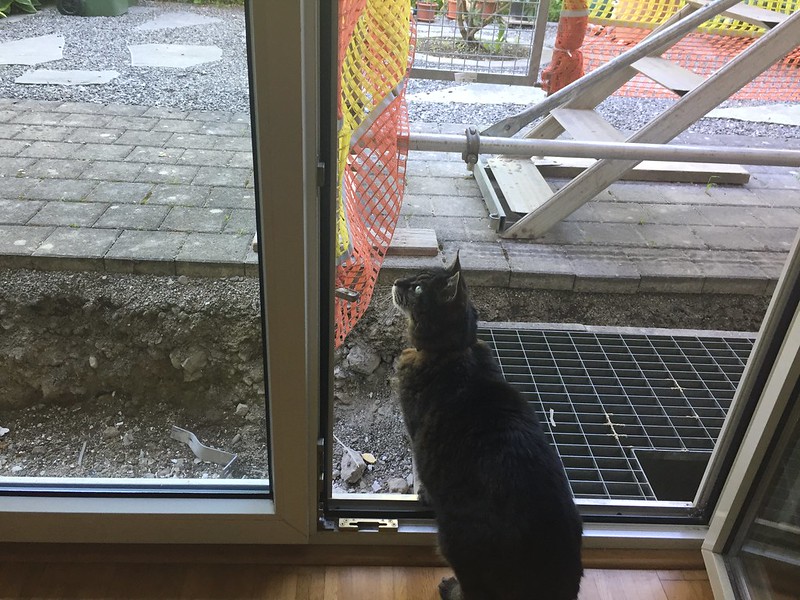 There I am again standing on the precipice of risk. There was a day when I could leave my home and wander into my territory without a care in the feline world. Even a fight with Roschti, the feline next door, armed with claws and teeth, was a piece of cake/tuna fish in comparison. Now I have to think about it since this empty chasm exists between me and my realm and territory. There must be a devious plan afoot. There is a new tribe of humans, called builders. One day they began to dig – not with shovels, but with machines. Eventually my home was surrounded by this deep chasm.

I did not give my permission and they did not ask me. They have no respect for the felines that were once worshipped as gods. If the pharoahs in the old country had remained, humans would be taking orders from us. They would be bowing down to us and bringing tuna fish, caviar, bird fricasse and mouse chateau briand on silver dishes. Instead we must be satisfied with hard tasteless wannabe tuna fish in the shape of vitamin pellets. I am diverging.

So I am now confronted with a precipice, in life and in reality. First of all I look up, as it would be embarrissing if I was being watched by another feline. If i fell and stumbled on the precipice I would be the joke of the local feline tribe. I am alone, but I will do it with style. One paw before the other to descend the slope. Shall I climb the opposite side or take one of my delicate jumps? I decided on the jump and now I am on the other side and ready to defend my territoriy from other marauding felines. I am not alone in my battle against the evil builders. I just met Roschti. He is exhausted because he also had to conquer his own precipice. We are now felines with a cause – may the builders fall down their precipices.