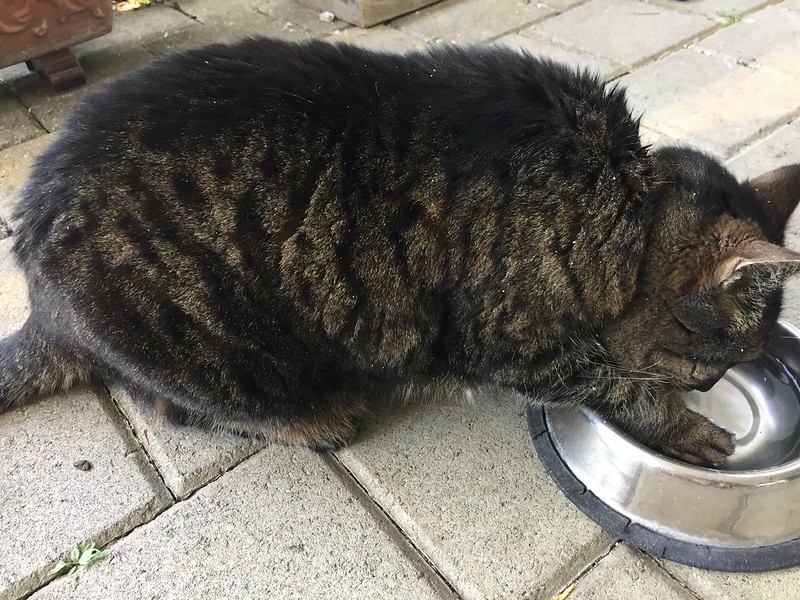 There is nothing like a cooling drink of water when you have survived a stress situation. I had spent a few hours in one of my resting places. I was relaxed, had a wash and then was confronted with the next problem. Where shall I sleep now? I had already occupied the cushion at the top of the cupboard and Mrs. Human’s bed covers still had the dent where I had spent a restful two hours of sleep. I was bewildered, and knew I had to find a new place to sleep. Using the same places twice on the same day is not good for the balance of the feline vegitative nerve system.

There is only one cure for this problem: a drink of fresh water from the bowl, but there again which bowl? I decided on the bowl outside, as  I had already tasted the water in my dining corner. Inside water can be very boring, as it usually comes from this thing called “tap”, mixed with all sorts of chemicals as it is “good for you”. I discovered some time ago that the human phrase “good for you” has nothing to do with the feline ideas of well being. Although the water outside is also from this tap thing, it matures in the fresh air. It can absorb various aromas, even particles contained in the air. If it has rained in the meanwhile, this is a great improvement, adding various textures to the water. Today it did not rain, but the sun is shining and its ultra violet rays infiltrate the feline taste buds – this is strictly feline, humans have no idea what the are missing.

Note the placing of my right front paw in the bowl. This adds to the flavours from where my paw has trod. This is a special paw, and when placed in the water bowl, detonates an explosion of flavours. And now to sleep. I can see the shade of a tree inviting me for a further few hours of sleep. Three different sleeping places in six hours, this is feline ecstasy.