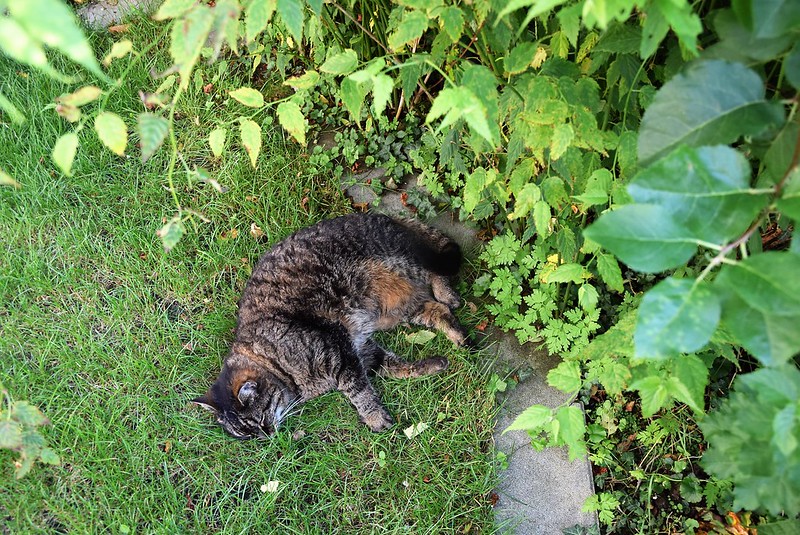 It is a hard life being a feline. I am absolutely knackered. The stress  has caught up on me. I spent the night outside, Mrs. Human has a comfortable chair with cushion, what she calls sun bed although I do not use it in the sun, too hot. When I awoke this morning I had hunger pains, really. I was almost at death’s door and was sure that one of my five remaining lives was deiminishing rapidly.

I descended the sun bed, which was very exhausting and made my weary way to my food bowl. At last replenishment after an exchausting night. I felt like a spent piece of cat nip with its leaves torn and punctured, I was a physical wreck and then what did I see? No, this was feline cruelty. The remains of my bowl of food, half full with hard tasteless vitamin pellets, artificially flavoured with some sort of lookalike tuna fish taste. I would have preferred the real thing, so dragged myself to Mrs. Human’s bedroom door and did a few scratches. She ignored me completely. Me, Tabby the feline once worshipped as a god. I was left outside in the corridor scratching my paws down to the roots. I had no choice, but returned to the food bowl and forced a few mouthfulls into my body. It was then that I decided to produce a hair ball as punishent for my human neglect. I walked away and heard how Mrs. Human opened her bedroom door and trod on my hairball and screaned, Humans can be really hysterical sometimes, for no reason.

I was now really exhausted, dragging my tired and weary body to the next sleping place. I found it on top of the cupboard, where I could observe everything. I even saw Mrs. Human washing the floor and her shoe after my hairball attack. This was good. Now she was awake and ready to do her duty and take care of my wishes. In the meanwhile I decided to sleep and plan on my next sleeping place. Yes the life of a feline is full of responsibility.