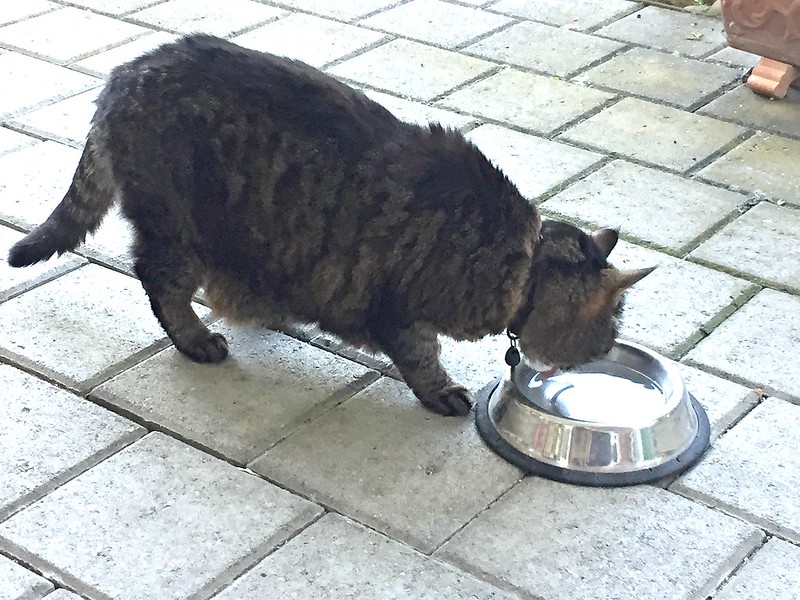 “Is that strange human still there Mrs. Human?”

“You mean the man that was doing some building work outside on the porch.”

“I do not know what he was doing, but he does not belong here in my territory. He did not ask for permission to intrude and he was not welcome. I went out for a drink from my private water supply and he was hovering.”

“But there is always water avaialble inside in your second water bowl.”

“That is not the same thing Mrs. Human. I want to drink from my bowl outside.”

“I am sure it would not have bothered the man if you had been outside.”

“But he would have bothered me. There is nothing worse than being observed in certain private moments when you want to be alone with your thoughts, especially when drinking.”

“Oh, I didn’t realise that was such a private moment for a feline.”

“There are many things you do not realise about felines Mrs. Human, but as a slave to the cause of caring for feline needs you are OK. The intruder has now gone so you may refill my bowl of water outside.”

“But there is still water left in the bowl.”

“That is not the point. I was being observed by a strange human in my territory and who knows what influences he had on my private bowl of water. Perhaps he had altered the taste, made it less enjoyable. I need a fresh supply of water.”

“But he did not touch your water, humans have their own water to drink.”

“Are you implying that feline water is not good enough for humans. Our water is the best. You have obviously never shared a bowl of water once licked by a feline. You would then realise what you are missing.”

“Thankyou for the invitation Tabby, but I really don’t think it would be my thing.”

“It was not an invitation Mrs. Human. My water is mine, not to be contaminated by a human tongue.”

“Don’t worry Tabby, I would not dream of tasting your water.”

“Good, I am glad we have clarified that matter. Mrs. Human stop smiling, this was not a joke, but a serious matter.”