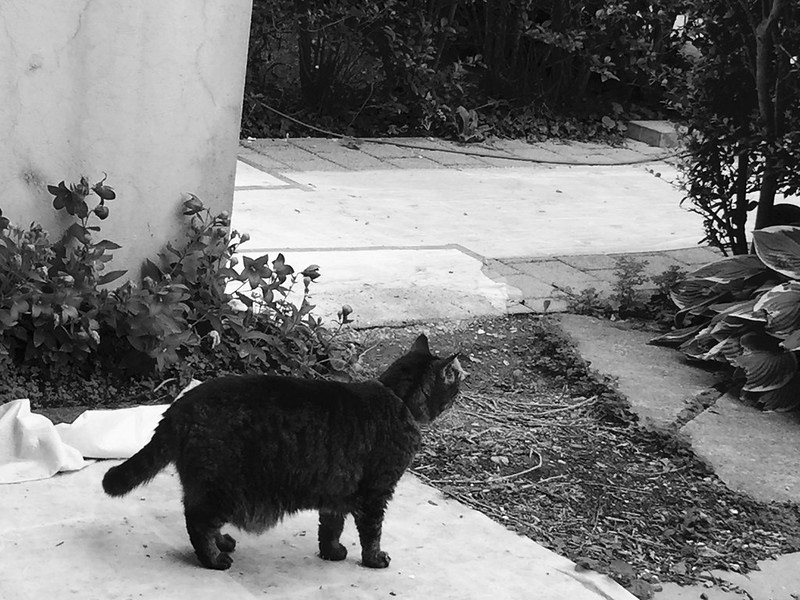 “Tabby, what are you looking at?”

“Grit of course. I was just about to settle down to an interesting conversation. At last I have found a companion where I do not have to see colours. Grit is grit, feline colour.”

“That is because grit is wall colour and I thought we decided that walls were not capable of talking.”

“It is a component of a wall.”

“All the better. I love grit, I can watch it for hours. The wall is closely related to the grit and told me that grit is actually the wall’s ancestor. Many years ago there was sand everywhere in the old country where we were worshipped as Gods. The sand shifted and changed into grit in some places. And the grit became a wall. Talking to grit is more interesting than talking to a brick wall. Grit moves and can change its position. Grit goes places Mrs. Human.”

“Humans make walls from grit and grit does go places, I must admit. It goes  into your fur, between your claws and you bring it into the home and we eventually have grit everywhere.”

“That is great, I do not feel so alone being surrounded by wall ancestors.”

“But I do not like grit everywhere. It can even get into the food. Grit belongs outside.”

“If it bothers you so much, you could sweep it together and make a pile for me.”

“Tabby I had enough problems with your hairball collection and now you are not going to begin to collect grit.*

“If you had moved the wall into my room like I told you, I would not need the grit.”

“Tabby I think it is time for one of your marathon sleeps.”

“Not whilst I am discussing the meaning of life with the grit.”

“And what does the grit say.”

“That life is pretty gritty sometimes.”

“Of course, it was a silly question forget it.”

“And now for a relaxing sleep, but Mrs. Human.”

“Brush my sleeping cushion, it is full of grit.”