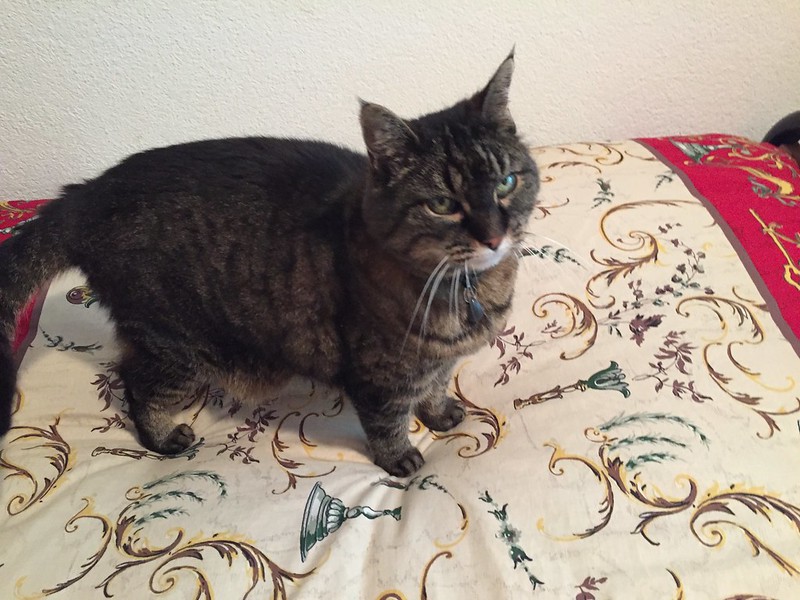 “Tabby keep still, I cannot take a perfect photo if you keep moving.”

“Still only exists in meow when we are planning an attack on something that is moving. It is easily explained. If I see a mouse in the middle of a field and jump around like a carousel it will feel the tremors on the earth and disappear into the nearest mousehole. Carousel-like movements are not very intelligent. On the other paw I see the mouse, and crouch, waiting until the mouse moves closer. When the mouse is in paw distance, or even nose distance I pounce, but with the speed of feline lightening, which is faster than that of normal lightening. It is all a question of applying a quantum mathematical pounce and all being well you have a mouse between the claws.”

“Very clever Tabby, I must say. We humans just go to the supermarket and buy what is on offer.”

“Which is also very sensible. Do they also have mice in the butchers department.”

“Not exactly, it is not so popular for human consumption.”

“Perhaps frozen mice. That would be a good idea. You could then buy them for a reserve, I am not fussy. I can wait until they thaw out.”

“Tabby human supermarkets do not sell mice. It would not be allowed.”

“That is a mistake. I am sure it would be a success if they were sold. All the feline slaves, like yourself, could buy them for their felines. In the meanwhile I will settle for tuna fish. Of course I am also partial to a chicken breast, but the problem with catching a chicken is their size. Look, something is moving – got it. Now that was very tasty.”

“Tabby that was a beautiful colourful butterfly and now you have eaten it.”

“You forget, I don’t see colours, and as far as I know you cannot eat colours. So now for a sleep. If you want a photo, now is your chance – you have a few hours time until my system has digested the butterfly. You know butterflies are very tasty. Have you ever tried one Mrs. Human?”