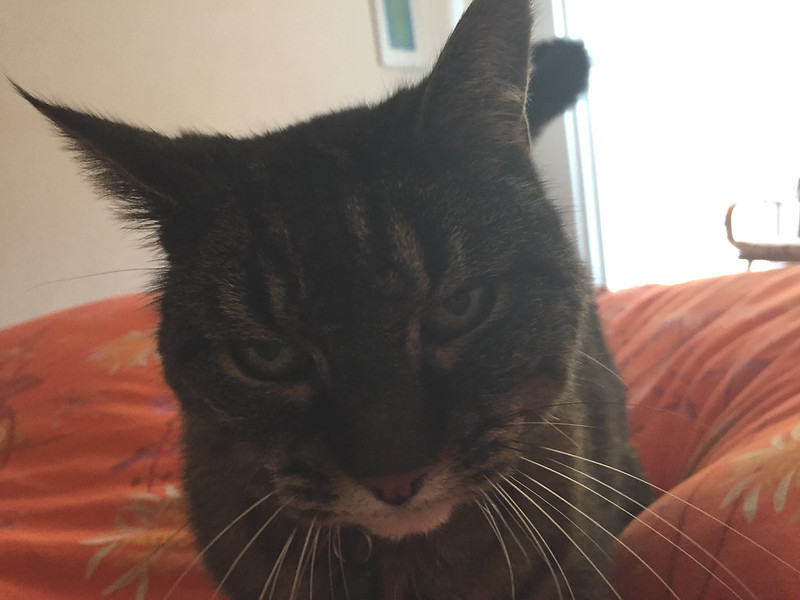 “Tabby, I said laugh for the camera.”

“Laugh does not exist in meow, we felines are not equipped with facial muscles for laughing and on the other paw, I do not have stuff to laugh about.”

“I know a joke Tabby: They make cat food out of cow, fish, turkey, chicken & lamb meat—but not mouse meat, which is probably all cats want.”

“So I am still waiting for the punch line, the one that should send me into hysterics, if I had the ability. I can only hiss at that one. Oh, well I suppose it is a statement of fact. No-one has ever asked a feline what they want. It is not a very logical joke. The one about “Why did the cat cross the road” is much better.”

“That’s because it is an unfinished joke. The cat is still waiting for a gap in the traffic to reach the other side. It is all a question of observance and patience.”

“It isn’t, especially if the cat crosses the road at the wrong moment.”

“Not really, he still has 7 lives left, if it is the first time. That is probably why you don’t often see cats crossing the road.”

“No, because the first 7 times it didn’t work and they want to save the last life until later.”

“That was black humour Tabby.”

“Yes, it even happens to black felines.”

“Tabby, you are priceless.”

“I know, it is a fact of feline life. I would smile if I had the muscles to do it with, that’s a feline life (at least one of them).