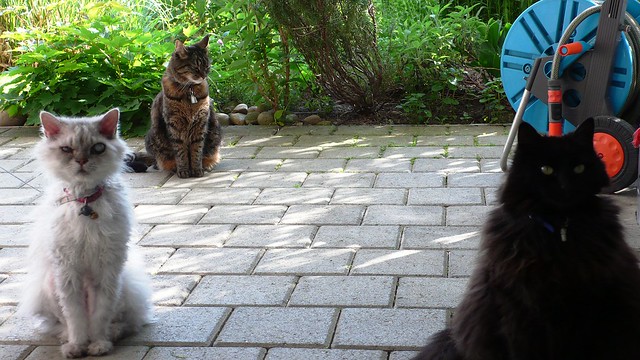 Mrs. Human here. I did not want to wake Tabby, she deserves her 23 hour daily sleep. It is a hard life being a feline and keeping up appearances.

Now what do you think these three are anticipating. It was in the earlier days. Tabby is sitting at the back, she was always at the back being the shy and modest feline we all know her to be. Her litter sister Nera is on the right at the front. Nera was always No. 1. She was the biggest out of the cats, although she instisted it was fluff and not fat. We believed her just to make her happy. They we have Fluffy on the left, our blind Selkirk Rex cat. He was the only one with a pedigree, but it did not seem to bother him who his ancestors were. He was the man in the pack, but did not really notice it, after the memorable day when he paid a visit to the vet.

Fluffy was blind. Through an accident he lost his sight at the age of 2 years, but he never realised that he was blind.

And so there they are, the “trio infernal”, who kept me on my human toes for many a year. Both Nera and Fluffy are now in the eternal corn chambers and Tabby is left to hold the fort and keep me awake with her wishes.

But what are they waiting for. It is obvious. I was preparing three bowls of tuna fish and they all wanted to be the first.