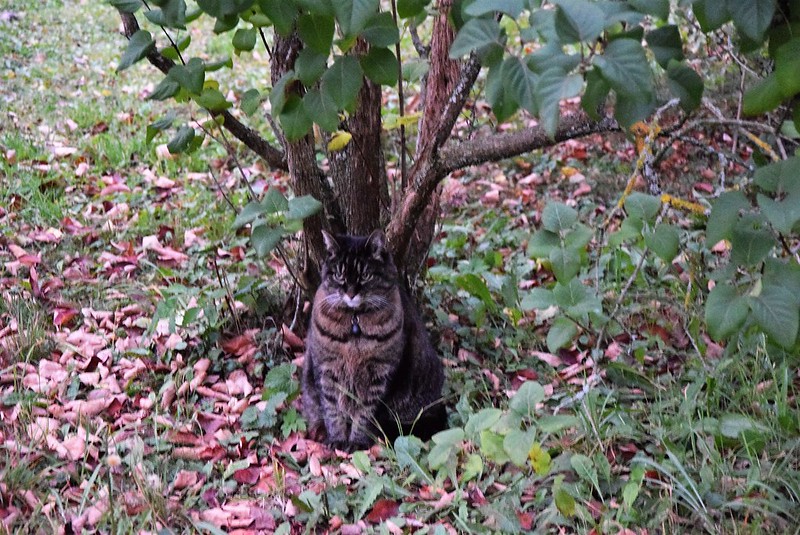 “And now you must believe me Mrs. Human.”

“You mean that you are posing for a nice photo.”

“Of course I am posing for a photo. It shows me amongst all my victims. You can hang it on my wall.”

“Victims? Did you kill someone?”

“Mrs. Human, I am sitting amongst my triumphs, my conquests of a bitter fight. You never wanted to believe me, but now I have the proof.”

“How many dead leaf soldiers can you count surrounding me.”

“There are far too many leaves to count Tabby. At this time of the year they are lying around everywhere.”

“Of course they are, because I killed them. I was watching from a safe place and then I saw them assembling for the attack. It was happening thick and fast. One after the other was diving, but I caught them with my claws and killed them. I pounced and suffocated them. The attack of the leaf soldiers has now been stopped. There are a few survivors here and there, but they no longer have a chance. Here you can see me sitting amongst my trophies. It was a far, far better thing I have done for a long while. You can now sleep safe Mrs. Human, knowing that they will not be coming for you.”

“Yes thankyou Tabby, but leaves are just leaves. They fall from the trees in Autumn every year, but you do not have to worry. They will reappear again in Spring.”

“They do what? You mean that this was not the last charge of the feline claw brigade. They will return?

Leaves to right,
Leaves to the left,
Leaves in front,
falling and attacking;
Storm’d at with claws and teeth,
Boldly I charged with success,
Into the jaws of the leaf soldiers,
Into the mouth of the leaf attack
Rode Tabby the cat.

But I will be back next year, same time and place. Take another photo Mrs. Human, for my fan club to show them what a brave feline I am. And one for Dusty the dog, he is a faithful follower and even believes me, which you do not.”

“Of course I believe you Tabby, you are a very brave feline killing all those leaves.”

“What are you doing with that rake Mrs. Human.”

“Collecting them for the compost heap of course. You cannot have dead bodies laying around, they might begin to smell.”

“Of course Mrs. Human, you have to have a cleaner after a leaf siege.”