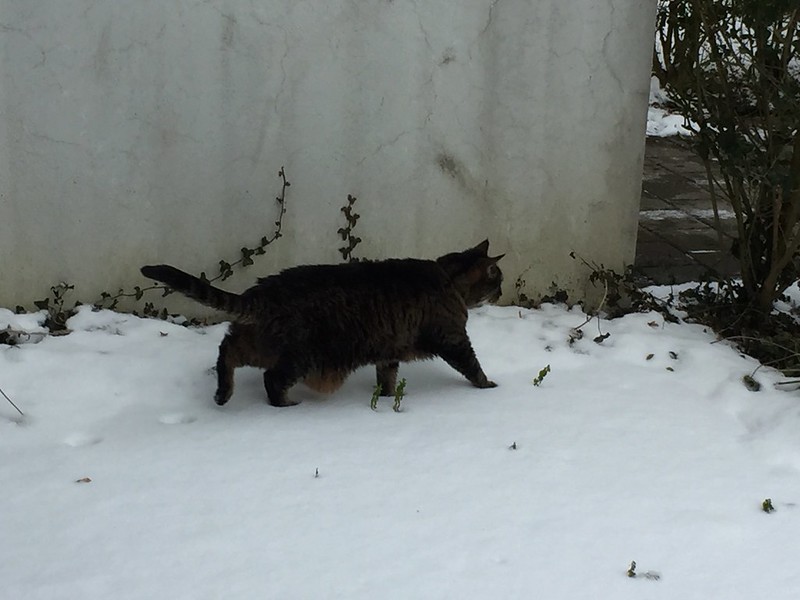 “Life is now boring since I killed all the leaf soldiers. There is nothing more to conquer. Perhaps you have something for me to do.”

“No Tabby, but if you are patient the leaf soldiers will return again next year.”

“What about the snow?”

“Yes, I remember the snow falling after the leaf soldiers disappeared last year. I killed that as well..”

“That was an easy job. The snow fell on my head but it was painless and then it fell to the ground.”

“Did you fight it until the bitter end.”

“No, it was not necessary. I must have scared it so much with my ferocious attacks that it disappeared on its own, although I had wet paws afterwards.”

“That was because it melted.”

“It did not melt. I scared it so much that it retreated. It is just a matter of applying the right tactics. You have to pounce on the leaf soldiers and tread them until they call for mercy. The snow is a coward. It does not fight, it retreats, although I am sure it will return again. It is an eternal fight with these aggressions and they always appear at the same time in the same places.”

“Thank goodness you do not have to fight the sun.”

“Yes Mrs. Human, that is a losing battle, but I have my devious escape route.”

“I stay inside of course, the sun does not enter my private appartment. In the evening it retreats and I can rest under a tree. The tree protects me from the sun battle.”

“Oh, I see Tabby. That is your explanation of the weather.”

“What’s weather Mrs. Human? It does not exist in meow.”