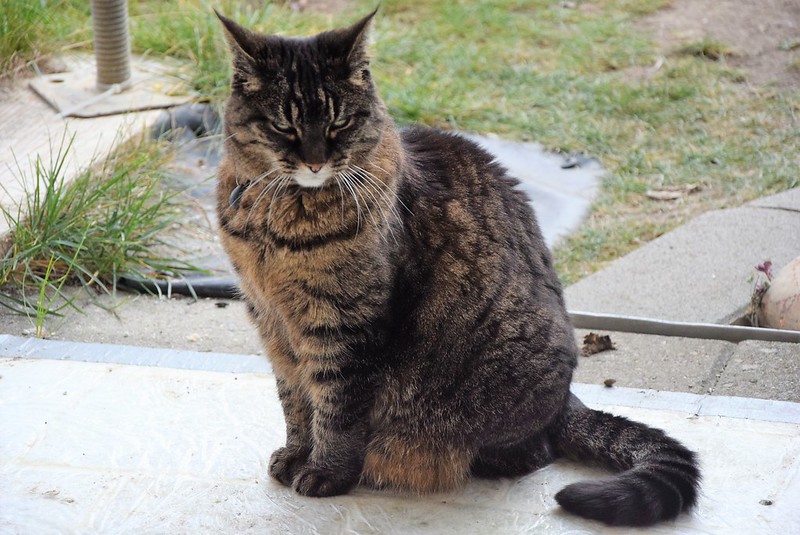 “At last a photo where you are looking in the right direction Tabby.”

“Of course, if you stand there clicking your fingers and jumping up and down and waving all the time I will look at you. It is called “attracting attention” or “look at the silly human”. Anything else. Shall I dance, sing a song and juggle with a ball using all four paws?”

“You do not have to exaggerate Tabby. I only wanted a few nice photos for our album.”

“It is my album not “ours” and I decide what goes into it. As long as you don’t put any of those naked kitten pictures in it.”

“You were born with a fur coat Tabby, so no naked photos.  I do have a close up of your Macdonalds M on your forehead.”

“That is nothing special. All Tabby felines have a MacDonalds M. We even get 20% reduction if we call in at the MacDonalds for a hamburger.”

“Oh I didn’t know that. Perhaps we could go together Tabby. I quite like a Big Mac.”

“That won’t work Mrs. Human. You do not have four paws or whiskers and cannot scratch behind you ear with your leg. And customers with opposable thumbs do not get a special rebate. That is only reserved for felines that enter by the back door. We have a special cat flap to the kitchen.”

“I didn’t realise that felines had their own connecions to MacDonalds.”

“Of course we do, it was our idea. There was once a human preparing ground meat and it fell to the kitchen floor. The feline that owned her pounced and flattened the meat. The human cooked it and the hamburger was created. Mrs. MacDonald, the human that the feline owned, called it a “Ham Burger” named after her feline Hamilton Burger-MacDonald and it was an immediate success. The felines were queing for their hamburgers and naturally the humans did not want to be missed out. That was the birth of the hamburger, but it had magical properties. Hamilton Burger-Macdonald had an “M” sign on his forehead, he was a tabby. Since then all Tabby cats are born with the markings.”

“Pull the other one Tabby.”

“Which one, you have two opposable thumbs.”

“It is just a human expression Tabby. Where are you going?”

“It is International Feline Bastet Day today, and we felines can get two hamburgers for the price of one.”