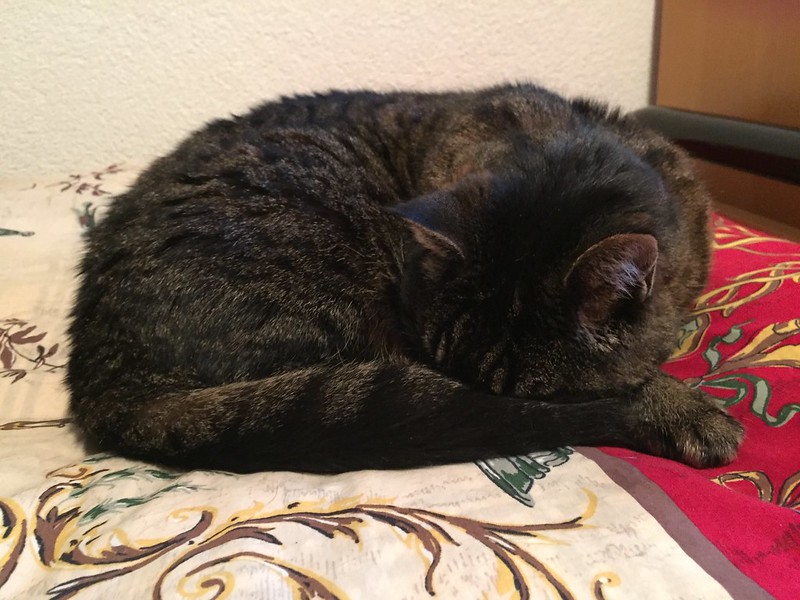 I am exhausted, it was a tiring day, but I beat them all. First of all I had to fight against the sleep waves. It was not easy, each time I pushed myself into a vertical position, my four legs collapsed beneath me. It was all I could do to turn three full circles before finding my next comfortable sleeping position. Luckily I soon sank into the world of feline sleep and I dreamt that I was fighting a herd of sabre toothed tigers, it was one of those throwback dreeams to the days when the Tabby cats were establishing their rights of paw swiping.

I suddenly heard a noise and awoke just as I was fighting the closing jaws of the tiger. It was the sound of opposable thumbs gripping a tin opener. I again had to fight my way to the food bowl and lift my weary head for food. Luckily it was tuna fish, as I did not have the strength to crunch on hard vitamin pellets. I was relieved that I did not have to starve because the tuna fish mechanism is a soft munching followed by sliding down the throat.

Again I was exhaustd and then I heard the meow of a feline outside. It was getting closer and I recognised it as an attack on my territory. Roschti, the feline. next door, was making her way to my manor. I had to be brave and withstand this attack.  She was already sniffing and preparing to mark my territory. I had no choice but to hiss in a loud meow and call Mrs. Human.

“What is the matter Tabby?”

“Look outside, Roschti is heading for my territory for a takeover bid.”

“Oh Tabby, this is terrible. I will do the necessary.”

It is always good to train your human to fight your battles. Within a few human moments, Roschti disappeared with his tail between his legs with Mrs. Human following. And me? I decided to recover from the exhaustions of battle and sank into another few hours of sleep. I was so exhausted from the excitement, and was soon purring myself to sleep. Oh, what a day that was, but I braved my way through it.