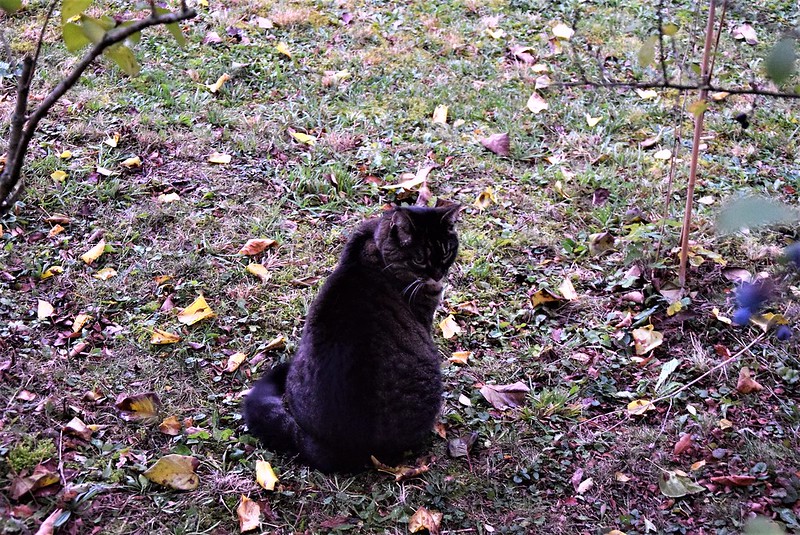 Always look behind, you never know what could happen. I expect a battle to the end. They are everywhere, attacking and covering my territory. They try to take over every year, but I have fought them off with persistence and bravery. Jut look at them, waiting to pounce, continuously changing their colours.

The worst are the yellow troops. They are the front line, those that come first to spy out the land and watch for guardians like myself. They pretend to die, but only lay and wait. As soon as a breath of wind arises, they rise again for an attack. Those that surround me are my victims. I fought them until they submitted to my claws, my talons of death. I pierced them, but they did not bleed. They have assumed supernatural powers, and have now entered a state of dehydration, but I will not be fooled. Next year they will return in their old shape and form.

Come closer and you will see the dead remains of my conquests beneath my paws. I am observant, and keep an eye of their development, but I am alone in my battle. I must make my conquests alone. But wait, Mrs. Human is approaching, will she assist in my battle against the evil doom awaiting us all?

“Tabby what you are you doing sitting amongst those deal leaves. You drag them all into the home and I have to sweep them together and throw them into the garbage.”

“But Mrs. Human, they are my victims, those that I defeated in a battle to the last whisker.”

“Forget it Tabby. They are dead before they arrive on the ground. It is Autumn and it happens every year at this time.”

“But they are leaf soldiers, bent on destruction of all moving objects. They are my war trophies.”

“Rubbish Tabby, now come inside and eat your tuna fish.”

“I am on my way, I can always kill the remainder tomorrow.”