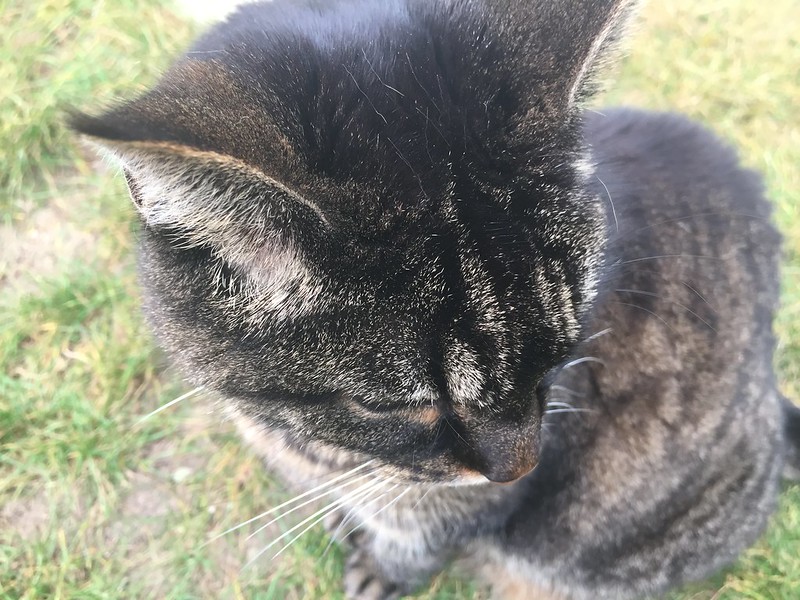 I have really tried, have spent hours of sleep meditation trying to fine the solution to the enlightenment of humans, but it is not possible. We felines are such uncomplicated creatures. We never suffer from insomnia, we have no time for it. Humans have unregular sleeping patterns and do most of it when it is dark. Why sleep the best hours of your life away when all the excitement happens at night. When the dark hours arrive it is time to explore. It is then that the interesting things happen, the world is teeming with life. Humans, they sit in front of a box in the evening and might even fall asleep. Perhaps that is the human way of enjoying the scents of excitement.

Humans do not meow, they make strange “brumming” noises, although they seem to understand each other. Why complicated when a simple meow suffices. I have even noticed a few reoccurring noises in their speech pattern, “Tabby” is often said and then the human looks at me. I look away of course. Does she mean me?

They also have strange washing habits. Instead of a thorough lick with a tongue they submerge themself into a continaer full of water, and hot water: disgusting, water is for drinking and not sitting in it. And the tongue? They apply something smelly with the water and they rub it all over themselves. Have you ever seen the bare facts of a human – they don’t have fur, just a layer on the top. And again no licking, they smother the top fur with something from a bottle and it makes bubbles.  They have an external tongue that they used to remove the water. The water disappears afterwards, but I have no idea where it goes, what a waste.

Not to mention eating. They sit and use metal objects to make everything smaller probably to compensate for their missing  pointed long teeth in the lower jaw for piercing, grinding and chopping. Something must have gone wrong with the human blueprints when they were manufactured.

They are poor unfortunate creatures, and do not even have whiskers, although the male of the species now and again has a growth appearing on its face. They even have two legs missing, although compesated by something called “arm”. I am glad to be a feline, although I have one regret. That we were not equipped with opposable thumbs, but wait until the next evolutionary event, then we will get them, but perhaps the humans might become exinct. Let them keep the opposable thumbs, then they can still empty our litter boxes and open tins.