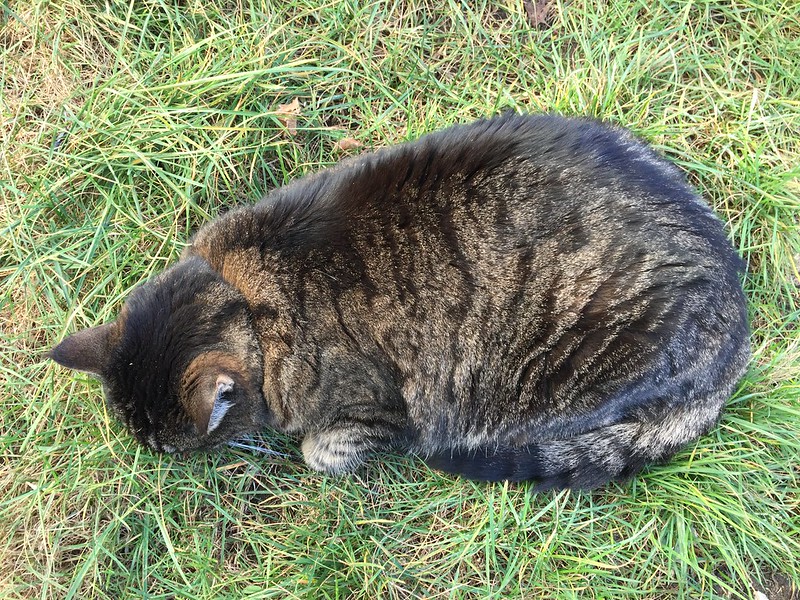 “Look Mrs. Human, I have won my battle against the builders.”

“No, Tabby, the builders have finished their work and have now gone away.”

“But I threatened them with my claws and my teeth and made ferocious hissing noises. They packed their machines and left.”

“Really Tabby. Whenever a builder appeared you ran inside.”

“That was not because of the builders. I wanted to keep an eye on them and it was easier through the window. I saw how they were shaking with fright when they saw me. Of course, I had to enlist support to scare them away.”

“You had someone that helped.+

“Of course, the leaf soldiers appeared on the scene just at the right time. At first the builders were surrounding me with their noise making machines, and then the leaves began to fall on them. It was then that they began to leave. There were leaves everywhere, it was a battle betwen the builders and the leaves.”

“I was directing the attack from the top of my friend, the wall. The first attack was made by the brown leaves, but then came the red leaves. Eventally the yellow leaves arrived and the builders ran. They could not take more. They were knee deep in leaves.”

“Are you sure they left because of your devious plans. It all sounds very surreal to me.”

“They had no choice, but to remove all the metal cages they had built as they were full of leaves. The leaves are still here watching in case there will be another danger appearing. I am now protecting the grass, which had disappeared long ago. My 9-4 lives are again worth living since the grass returned. I just keep an eye on the leaf soldiers, as I heard they were going underground to make plans for their next attack next year.”

“Yes of course Tabby, never trust a leaf, they return every year and are a threat to your existence.”

“At last you realise the danger of the situation Mrs. Human. Leaves are not surreal, but a reality and I  can manipulate them. Even the builders hide from the leaf soldiers.”