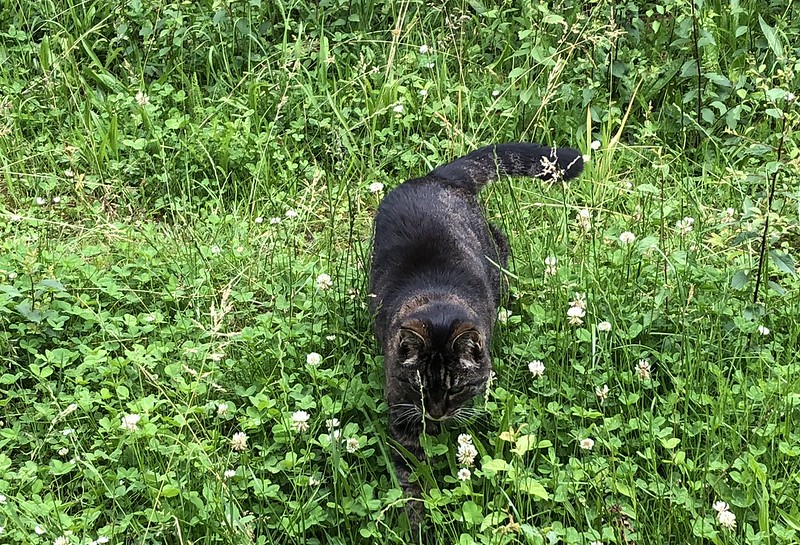 I had to get away from things, take a walk in my territory. Mrs. Human has one of her hissy fits, just because I manufactured a hairball on her carpet. I really do not see the problem. She has only one carpet, the rest is wooden floor. I did her a favour of depositing the hairball on the carpet, as the colours mixed so well with those of the carpet, but no. She was all flummoxed because she said it was difficult to clean it off the carpet and the floor would have been easier.

That is a matter of opinion and why clean away a carefully constructed hairball. Some would be glad of such an artistic work. It was really a hairball worthy of a museum exhibition.

Humans get annoyed at the least little things. I sit at the open window and am absorbing the atmosphere outside. Mrs. Human asks “Are you going out or not? There is a cold draught entering the apartment.” What does she expect? That I make such an important decision at once? These things have to be analysed. Such decisions cannot be made in two minutes, they will influence my complete daily routine.

I put two paws outdside and notice a vibration in the ground so I pull them back again just as Mrs. Human was going to shut the window. I warned her to be careful, I was still thinking it over. Again another hissy fit. Humans can be so unjust, or perhaps they are just uncertain. Their character is not as perfect as the feline character that is sure. A little insecure. Half an hour later i was stil deciding whether to leave or not, these important decisions cannot be made in five minutes.

In the meanwhile Mrs. Human is no longer talking to me and has put on a warm pullover. All it needs is a little patience and common sense.