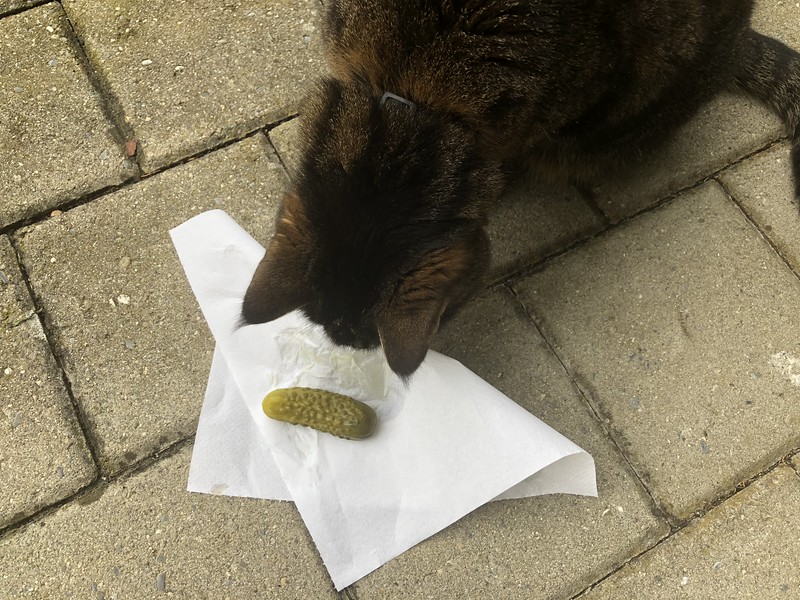 Sometimes humans can really be annoying. Mrs. Human always gets the wrong end of the tail. She sees a daily prompt and is convinced that we felines are on the same whisker frequency as she is. Our intelligence operates on an entirely different level, so advanced that a mere human could never understand the intricacies of our brain. After all we were worshipped as the gods we are, not wanting to repeat myself.

She sees the prompt subject “pickle” and what does she do. She takes something green, resembling a miniature cucumber, pulls it out of a disgusting smelling liquid not worth a sniff and places it on the ground before my paws to take a photo. Then she gets annoyed because I walk away. What does she expect. If it was a bowl of tuna fish, I would stay, smile for the camera, and eat it. I might even play with it in my paws and do a dance, just to keep her happy. I could even force a smile if it was a bowl of hard indigestible vitamin pellets. I told her if she had placed one of my famous and exclusive hairballs next to me I would have posed with it. That would be a photo, worthy of a Feline Pulitzer prize, but no, she takes a photo of me with a pickle.

I have a allergy against cucumbers in any case, but I can control my feelings with a pickled miniature cucumber.  I can only hope that tomorrows prompt is diamond studied collar, that would be something to show the other felines. They would be queuing at the door for my paw print.