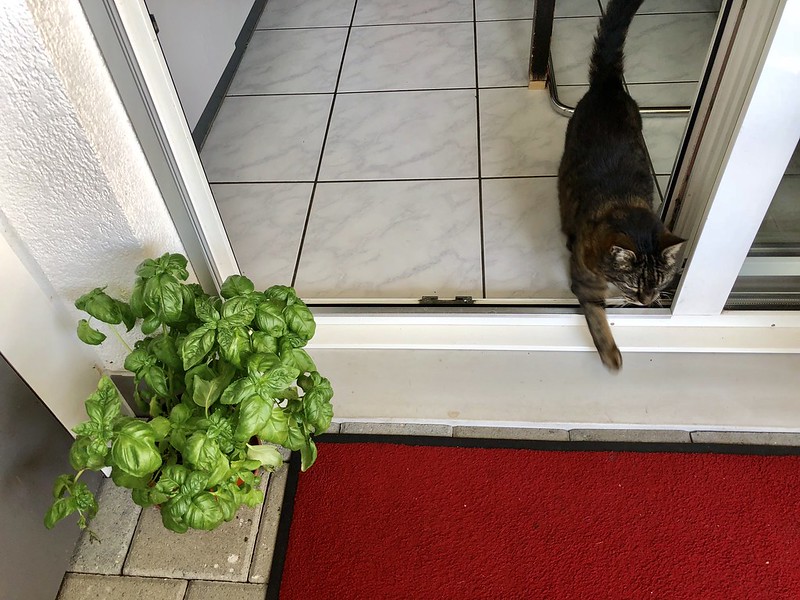 “Mrs. Human take that smelly green thing away. I had to squeeze through the window to avoid it.”

“But Tabby, today the theme for your blog is Italian and it is basil. The leaves go very well with tomatoes and cheese.”

“I am sure they do Mrs. Human, but it is not something that I like to include in my diet.”

“But today we had spaghetti for lunch, which is typical Italian food and you enjoyed the sample I gave you.”

“Oh yes, it was very good, I just had to separate the meat from the white worms. I do not eat worms.”

“But that was the spaghetti.”

“It was a dead worm. I stared at it for a while and noticed it did not move, so it must have been dead. Italians must be funny people if they eat dead white worms.”

“It is typical Italian food.”

“Of course they are Tabby, they just live in another country and speak a different language.”

“You mean something like Persian felines, or Ragdoll cats. You can even get cats with no fur, like that one that lived on the other side of my territory. Roschti the feline next door is also different to me, he doesn’t have the Macdonalds “M” on his forehead, and is something they call ginger, but we all speak meow. Even the Siamese felines speak meow, the same as I do. Humans are funny, they do not understand each other because they speak different languages. If I hiss all the felines understand me.”

“Well we have that in common Tabby. If I hiss, or scream in human, all the humans understand me.”

“So humans only understand each other when they are fighting.”

“We try to learn each other’s languages.”

“You see, we felines have no problems, we are international, that is why we were once worshiped as gods, everyone understood us. Now look at the world, everyone having problems with their territorial rights and they don’t even meow in the same language. I say bring the felines back to organise everything and put the humans back in the trees. By the way Mrs. Human, do you like bananas?