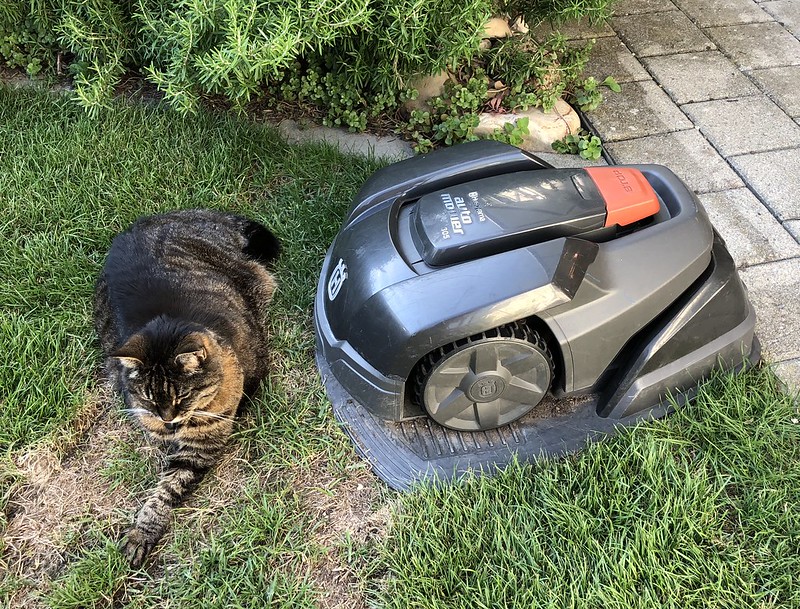 Now he is my prisoner. I have stopped his wandering around in the garden, he will no longer block my paths. This is my territory and no machine can change it it must remain open land. Today the humans had to call for help.  Their Mowey was no longer walking on my territory. It refused and I saw them shaking their heads and talking  about it. They had no idea.

Suddenly two men arrived, not just one but two. They had to remove some of the tiles to examine Mowey’s connections. I could have told them the problem, but no-one asked me.  I am just a mere feline that was once worshipped as a god.

And so they prodded and suddenly appeared with another cable, but discovered that the original cable was OK and nothing was broken. It was then that a loose connection was discovered. This was the problem. The humans shook their heads wondering how this could have happened. They had no idea.

OK, if I could laugh I would, but as you know felines do not laugh, The word does not exist in meow.  After a closer examination by these two men Mowey peeped again. They even sent him into the open lawn, not even asking my permission and unfortunately he found his wheels again. I then heard the humans say that Moweys body was now empty and it would take a few hours to revive him completely. He will be back tomorrow. In the meanwhile I am staying where I am just to make sure that he does not escape.

Tomorrow is another day of course. Now where was that wire I managed to pull out yesterday? I think it was the one in the middle.