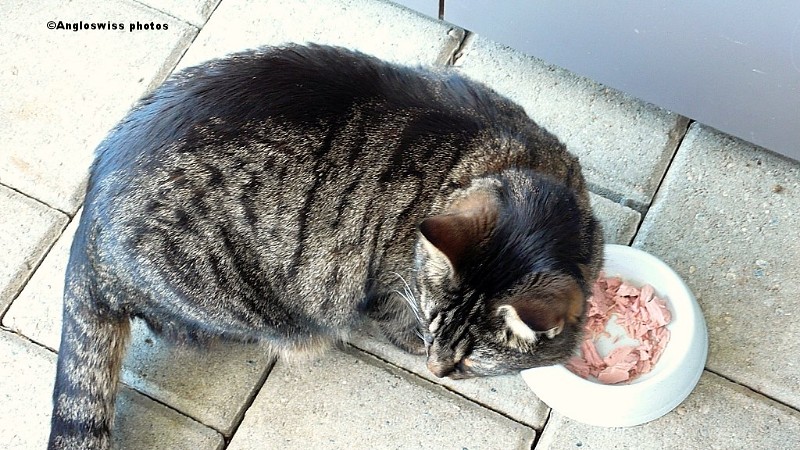 I think it was the food that confirmed my decision to stay.  Mum said I would now have to move on. I was old enough and the next batch was already on its way. She had quite experience in the family game, many fathers later and kittens she knew what we needed best.

Mrs. Human arrived and I saw that money exchanged hands. She bought me? It is a human thing, but I think it was my litter sister Nera that organised it all by telepathy. I was quite happy where I was, but she said we should move on and we could both go together. And so I had my first ride in a car with Nera. It only needed one box for both of us, we were then kittens. I was glad that we stayed together, it was our first time without mum, although she had left us to our own thing some time ago. I think it was all those strange cats she was meeting in the evening.

We decided to employ Mrs. Human as our slave, she was a good bargain. We even got used to the noise of the machine she had that sucked over the carpets. The first time we heard it we hid behind the cupboard. She was not very happy, as she had to move the cupboard to get us out, and it had a television in it. Food was always there, but we soon persuaded her that vitamin pellets was not the ideal solution and reached an arrangement for tuna fish now and again.  Sleeping quarters were fine, but there again we had to convince her that closing doors to bedrooms was not in the arrangement, after all a feline needs a bed now and again to assume his ownership.

Eventually she realised who was in charge and after a quick course in meow, we explained the terms and conditions of our ownership. In the meanwhile Nera is now living her 10th life in the eternal corn chambers keeping the corn mouse free and I am now the boss. Yes we decided to abide, and don’t tell Mrs. Human, but I think we made the right decision.