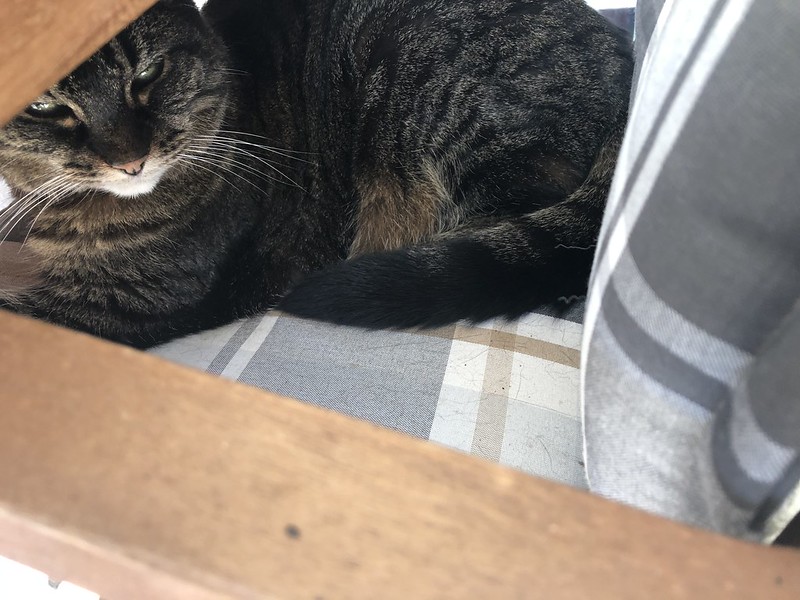 I decided to make myself scarce. There are things happening here that are pulling my world apart. When everything is in its right place then the feline world is complete, but Mrs. Human again does not consider my felines. Did she ask me to give my permission to transform my territory into a stone desert? Of course not, she has a dream now and again and when she awakes she changes my feline world.

One morning I entered my realm outside, just to snap some fresh air and to bury something which must be covered afterwards, not wanting it to be discovered by other felines. They might start talking about me behind my back otherwise, but they do it as well. When I arrived in the garden I found two strange humans wearing big boots. They began to dig up my territory. They removed the grass where I love to lay to cool down after a hot summer day, and another Mrs. Human arrived and made the branches of my tree shorter.

I was devastated, they were taking over and no-one takes over feline spaces without my permission. And then one of the humans produced a machine. When machines appear, it means noise. Suddenly where there was grass and soil there were stones: big stones, enormous stones, even my wall (to whom I confide my deepest thoughts) began to shake a little. I eventually had to flee. They switched on this machine and began cutting up pieces of rocks spraying white dust everyone.

If I had been warned  I could have braced myself for the shock. I must now go online to the feline psychiatrist, my mental condition has been shaken to its various cores. I am in danger of losing yet another life I am sure. Today the humans with the boots returned and began to build two monster blocks with the stones, but now I am reassured. The blocks have been filled with soft earth, ideal for digging and burying. They have made two recycling containers for me I am sure. Now I can climb to the top, deal with my business and at the same time keep an eye on my surrounding territory. You just have to look at things in the right perspective.