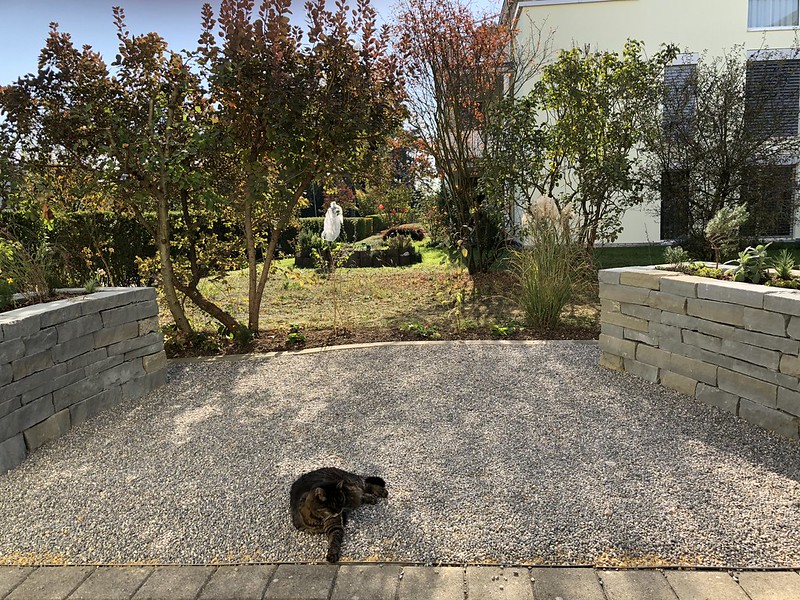 “I blasted them all away, the leaves and now it is all mine, mine: my territory. It was a hard fight, they were falling thick and fast, but I conquered the leaf soldiers. Now I am exhausted. Chasing leaves is a difficult job, but I had my secret weapon, the walls.”

“What are you talking about Tabby?”

“Another victory over the leaf soldiers.”

“But I cannot see any leaves.”

“Of course not. As soon as they began to fall I was there with all four paws and whiskers and the walls surrounded them. It was a hard fight, but I defeated them, together with the walls.”

“Really. How brave, and the wind had nothing to do with it?”

“Wind? Yes, I did feel a breeze now and again.”

“But Tabby it was quite a strong wind and it blew the leaves away.”

“But not without my help. And now the territory is all mine. The walls are protecting me from both sides. I told the walls to leave the space in the centre so that I could see them if they advance again.”

The leaf soldiers of course. I will defend our right to the last meow to keep us leaf free. You should be thankful for my bravery and help in these times of war.”

“Yes Tabby, but I did my little bit as well.”

“Not really. I just took the broom in my hand and swept them away. They are now in the garbage bag ready for the leaf collection.”

“But are they dead Mrs Human.”

“Of course they are, no longer moving. Do you want to see them?”

“No, Mrs. Human. That would be too much to bear. We should let them now rest in peace.”